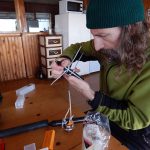 Water Levels from the “Centre of the Earth” Lithuanian speleologists (cavers) are using Solinst Leveloggers to collect water level data from some of the deepest caves on Earth! Between 2008 and 2012, cavers completed four expeditions to the Krubera Cave—the world’s deepest. During an expedition in 2008, two Leveloggers were deployed more than 1700 metres… Continue Reading »