Richard Jackson delivered a very interesting presentation on the need for accurate and complete site conceptual models when dealing with contaminated sites. Richard used four unique case studies to illustrate how important it is to “get it right”. Getting the model right, allows the right decisions to be made – especially when it comes to determining the actual source of contamination. 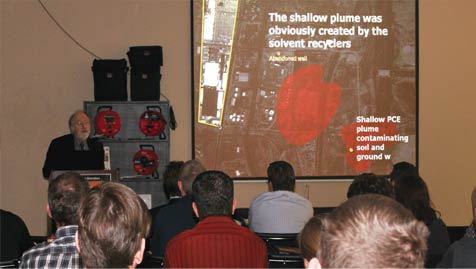 The recycling facility was ordered to pay $0.25 million and had to clean up their plume. The aerospace plant was sued for natural resources damages of $4.5 billion. A closer inspection of the field data with the help of a DNAPL flow model indicated that both plumes originated at the recycling facility. They had been split by infiltrating floodwaters from an unlined flood control channel (see figure below). The groundwater was found to be treatable and recoverable, as such, there was no actual loss of the resource.

This case study, and the three others presented, reinforced the need for detailed site characterizations. They provide a clearer picture of what is actually happening and what can and cannot be achieved at a contaminated site. 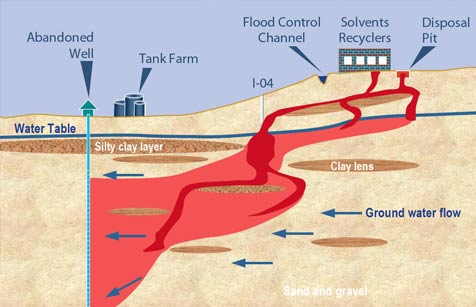 Richard has worked as a hydrogeologist since 1970 when he first worked with Environment Canada.  He established a laboratory at Chalk River Nuclear Laboratories in Ontario to study radionuclide adsorption from ground water, which was the subject of his graduate work at the University of Waterloo. Following educational leave at Stanford University in 1980, he returned to Ottawa and set up a laboratory to study organic chemical contamination of ground water at the Gloucester landfill adjacent to Ottawa Airport.  In 1986, Richard became Chief of the Ground-Water Contamination Project at the National Water Research Institute in Burlington, Ontario.   He joined INTERA in Texas in 1989 and worked with petroleum engineers at the University of Texas and Rice University to adapt methods of enhanced oil recovery to the characterization and remediation of NAPLs in alluvial aquifers.  He retired from the US Intera and returned to Canada in 2006.  He is now a Principal with INTERA Engineering Ltd. of Ottawa, Ontario and lives near Waterloo.  He is task leader for geochemistry and petrophysics with INTERA’s project to characterize sedimentary rocks beneath the Bruce Nuclear site in southwestern Ontario for the purpose of low- and intermediate-level radioactive-waste disposal, and continues to consult for the City of San Diego and consulting engineering companies in California and Florida. He is registered as a professional (geological) engineer in British Columbia and Ontario.  In 2008 he was awarded the Geoenvironmental Award by Canadian Geotechnical Society and was invited to give the Farvolden Lecture by Department of Earth & Environmental Sciences, University of Waterloo.  His spare time is devoted to revising a 1982 book on Geology for Geotechnical Engineers for Cambridge University Press.