Commonly, we hear of oceans being polluted by spills and contaminated run-off, but these are not the only major sources of contamination to coastal waters. Submarine groundwater discharge (SGD) is the discharge of fresh groundwater from the land into coastal salt water. Attention to this process has grown, as it has been observed that SGD is a major contributor of contaminants to coastal waters, which is resulting in the pollution and eutrophication of vital marine habitat worldwide.

SGD is hard to quantify, and site-specific field measurements are critical to accurately estimate rates of SGD. Universities, researchers and associations across North America have been teaming-up to try to understand this process, part of the broader understanding of groundwater-surface water interactions. This includes the University of Delaware (Delaware Geological Survey), who took the lead in a research project that is looking at how hydrological processes affect SGD, and hence contaminant fluxes into marine habitats.

A. Scott Andres, a hydrogeologist with the Delaware Geology Survey, provided some background information about the project.

With the aid of Solinst CMT Multilevel Systems, their research is looking at the importance of hydrologic processes (such as tides, storms, and climate), and how they control the position of the fresh water-salt water interface in the subsurface and how SGD occurs. They are also looking at how these processes affect the timing and magnitude of water and contaminant fluxes into an estuary. 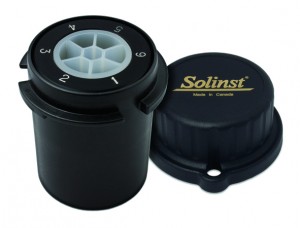 The study is being conducted in Delaware Seashore State Park, near Millville, Delaware, on Indian River Bay (an estuary). The project also includes participants from the U.S. Geological Survey, NOAA, and the University of Toledo, with funding from a National Science Foundation award. The multi-disciplinary team includes hydrogeologists, geochemists, modelers, and geophysicists, as well as ecologists and microbiologists. 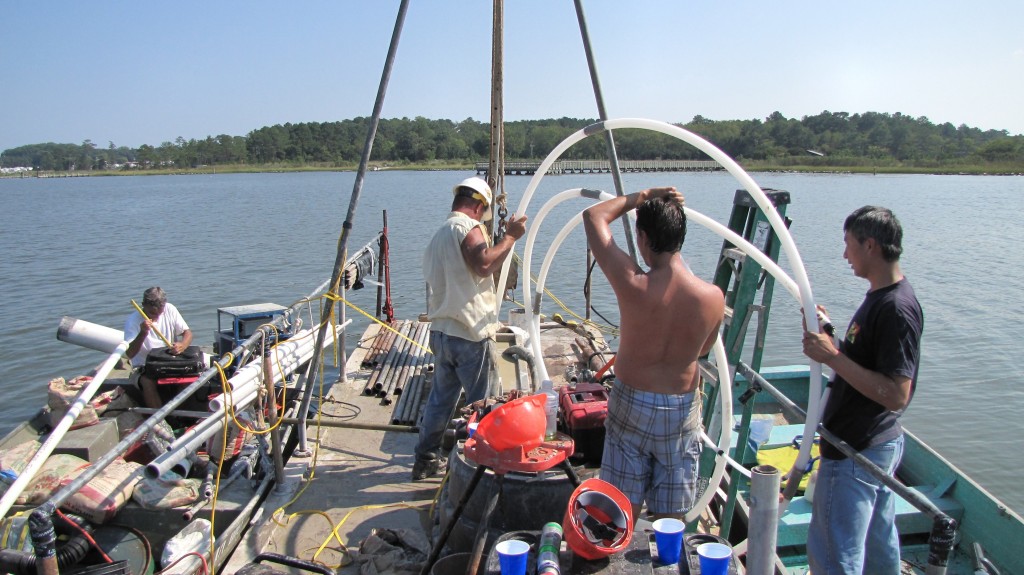 The area that they are monitoring in the bay subsurface consists of an 80-foot thick unconsolidated sand aquifer with an overlying low permeability mud layer. The CMT Systems were installed with monitoring ports from 3 feet below the bay bottom down to 55 feet below the bay bottom. Surface water depths in the bay at the installation points range from 2.5 feet to 6 feet.

Five to seven sampling ports were created in each system, at different depths. Watertight wellheads had to be custom built to allow for sampling from the surface of the bay. The wellheads are finished right on the bay bottom. Sampling tube assemblies extend right from each sampling port through the well head to the surface, and are long enough to be reached for sampling from a boat at surface. Protective covers on the surface were constructed from barrel ends and chain wrapped corrugated pipe.

From a boat, a peristaltic pump was used to collect samples from each of the sampling tubes. While collecting samples, temperature, pH, Specific Conductance, Dissolved Oxygen, and ORP were measured with the use of a flow through cell. Samples were tested for major ions, nitrogen and phosphorus series, trace metals, tritium, 15N, and N2.

A series of sampling events in the course of just over a year provided data that showed definite depth discrete distributions of fresh and saline groundwater below the bay bottom. “The ability to repeatedly sample multiple depths from a single wellhead or site was critical to characterizing the short-length depth variability of salinity and geochemistry,” said Andres. The results also showed the presence of fresh (Total Dissolved Solids of less than 1000 mg/L) groundwater beneath the bay bottom at distances of more than 750 feet from shore.

The data is being used to describe relationships between salinity levels and other physical/chemical constituents. It is also being used to develop models to describe nitrogen and phosphorus transformations in fresh groundwater as it discharges into the estuary. Previous models created for Indian River Bay estimated that SGD is responsible for as much as 1/3 of the nitrogen contamination in the estuary.

Although the CMTs are not currently being used for more testing, they remain installed. The process of integrating CMT-derived data with data from seepage meters, pore water sampling, downhole geophysical logging, and long-term monitoring of Specific Conductance, temperature, and pressure in offshore wells is ongoing.

The project team found that using the CMT offered them many advantages. They found the systems flexible, and easy to build and install; “We were pleased with the short learning curve to build and install CMTs and the flexibility to quickly adapt CMT design to our unique sampling needs and field-determined conditions,” said Andres.

According to Andres, accomplishing the same sampling strategy with a number of standard monitoring wells, or custom-built multi-port samplers, was not attainable with the available personnel, budget and timeline of their project. With the CMT, they were able to construct some CMT wells as the drilling was taking place.

Overall, the data derived from this study will be used to verify models, which help explain how different processes control submarine groundwater discharge, the effects on coastal salt waters, and how groundwater and salt water interact in the subsurface. This information can help reduce the potential for groundwater contaminants to enter marine waters.

Andres said these findings will be passed on to inform policy makers and regulators in governmental agencies who are responsible for developing laws and regulations that protect and improve water quality, so that appropriate measures can be taken to bring the State into compliance with the Clean Water Act.

Acknowledgement: Thanks to A. Scott Andres, with the Delaware Geological survey, for providing background information and the details about this project.