The Nature Conservancy has created a unique method of preserving freshwater resources through Water Funds. Water Fund projects bring together private and public water users, to pay landowners for the conservation and protection of the freshwater sources they share. Efforts focus on conserving and investing in green infrastructure, which help ensure high quality drinking water.

Water Fund projects have been replicated worldwide thanks to the support of their strategic partners: Inter-American Development Bank (IDB), FEMSA Foundation, Global Environmental Facility (GEF), and more than 200 local partners in several countries.

Paulo Petry, with the Nature Conservancy Latin American Region based in New Hampshire, coordinates environmental monitoring efforts for all Water Fund projects in Latin America. There are currently numerous projects underway in the region, with a goal to have 40 programs in water-scarce areas of Latin America started within the next five years. 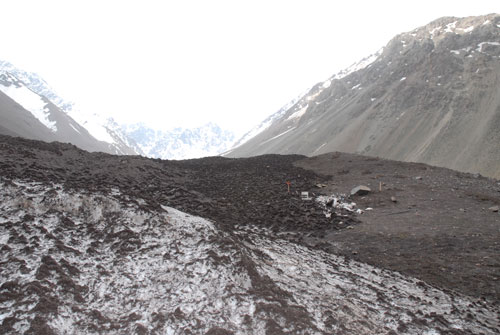 The Result of an Avalanche in the Mountain Wetlands of Chile

Currently, the design stages of the Santiago Water Fund are in progress in Chile. With help from a grant provided by the HSBC Water Programme and the technical assistance of the Latin America Water Funds Partnership, a hydrologic study of the associated mountain wetlands has been initiated. The hope is to demonstrate the importance of these wetlands in regulating and maintaining the high quality drinking water supply to Santiago. This will provide a strong case for their protection and conservation, and attract water users to invest in these efforts.

The extensive monitoring program includes studies in three separate and distinct wetlands in the Upper Yeso watershed. The three types of wetlands will be compared in terms of their hydrological regime, data will be used to estimate their water storage capacity and yearly water yields. Part of the project includes mapping the extent of the wetlands, the only productive water sources in the high altitude, arid environment.

To help monitor the hydrological regime of the wetlands, Solinst Leveloggers are being used to measure both groundwater levels and stream flows from surface water runoff. Petry hopes that the data collected will help explain the relationship between groundwater storage during wet periods, and surface flow during the dry periods when runoff from snowmelt and glaciers is minimal.

After recommendations on their ease of use in various environments, Petry has been using Solinst Leveloggers since 2012 in numerous projects throughout Latin America. “The sensors are very easy to deploy and Solinst offers a variety of solutions for communication and programing. The software is easy to use, and in my case there is a version in Spanish that is very helpful to train our local field teams,” said Petry.

Leveloggers are installed in a post-glacial alluvial fan and the associated wetland below it. Three Leveloggers are being used to measure surface flow, one at a point of inflow at the top of the fan, and two at outflow points at the bottom.

In addition, a series of monitoring wells have been installed in the wetland below. An adjacent alluvial fan, without a wetland, is also being monitored (one Levelogger installed) as a contrast to show the influence that the wetlands have on water quality and supply.

The second wetland being monitored is a flat plain fed by groundwater, which results in waterlogged soils year-round. Leveloggers are being used in monitoring wells and to measure surface flow.

The third is a perched wetland on the side of the mountain valley. This wetland has a very deep peat deposit and receives both groundwater contribution and snowmelt water during the spring thaw. The major function of this type of wetland is to retain fine sediments during spring thaws. A series of wells have been installed to monitor groundwater fluctuations.

Note: In addition to monitoring the hydrological regime, wildlife cams have been installed at some of the monitoring sites. They are also conducting a study on the effects of grazing on the wetlands. They are looking at vegetation responses and the changes in soil structure and water storage capacity in the absence of grazing.

Leveloggers and associated Barologgers have been installed since November 2014. The goal is to continue monitoring for another 5-10 years or beyond. Leveloggers measuring surface flow have been set to record data every 15 minutes between the end of October to mid May (summer months) and every 30 minutes during the winter months.

The Leveloggers recording in groundwater wells are set to log every 4 hours, year-round. Petry says this sampling regime is due to the high elevation, desert conditions of the monitoring sites (2,600 m +), which can become unreachable for up to 6 months and limits the ability to download the data.

Monitoring Site Buried in Ice for 100 Days by Avalanche 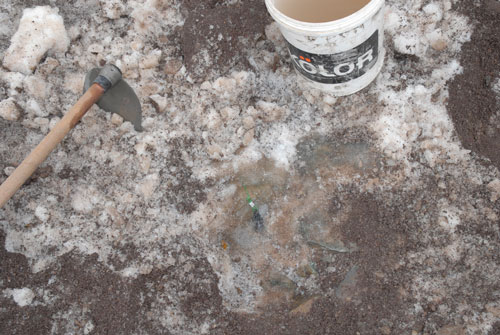 On November 17, 2015, the project team recovered a Barologger Edge that had become buried in ice after an avalanche. This Barologger was being used to record barometric pressure in synchrony with nine Leveloggers, in order to provide data for barometric compensation. It was found that the Barologger was in almost perfect physical condition and had never stopped recording data while buried. 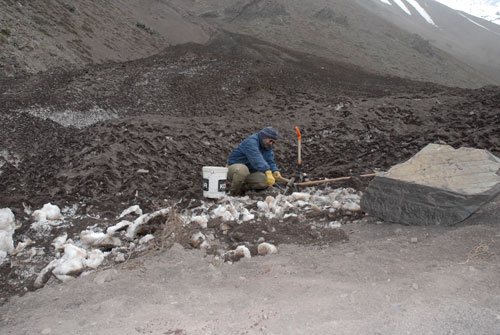 Barologger Edge Being Recovered from the Ice

After downloading the data, it was deduced that the Barologger had been buried for about 100 days. The data showed temperature oscillation leading up to August 6, and suddenly flat-lined to a constant temperature of 0.27ºC until it was recovered in November. Using field imagery, it could be speculated that the Barologger may have been under 3-4 meters of ice debris, before it receded enough to retrieve the instrument.

Even though the temperature data flat-lined, barometric pressure appeared to be normal when compared to data from the rest of the year (there was a 5 Mb reduction immediately after the avalanche occurred). After a series of tests, comparing this Barologger to other new sensors, it was shown to still work within the normal parameters of the instrument – it is back in the field recording new data.

Overall, Petry has been very impressed with the durability of both Levelogger and Barologger instruments, “We had a couple instances of vandalism where the sensors were removed from the wells, hit by rocks and tossed away. When we found them they continued to work normally and did not lose any data.”

Durability definitely showed to be a very important factor during the avalanche event!

Although we are glad that the data was retained, and that the Barologger was still able to be used for such a critical project, Solinst does not recommend subjecting Leveloggers or Barologgers to such extreme conditions – in this case, it was unavoidable! Always install Levelogger and Barologger instruments within their specified pressure and temperature ranges.

Solinst thanks Paulo Petry for providing the details of this project.