Water Levels from the “Centre of the Earth”

Lithuanian speleologists (cavers) are using Solinst Leveloggers to collect water level data from some of the deepest caves on Earth!

Between 2008 and 2012, cavers completed four expeditions to the Krubera Cave—the world’s deepest.

During an expedition in 2008, two Leveloggers were deployed more than 1700 metres below Earth’s surface. In 2009, previously recorded data was downloaded, and three new Leveloggers and Barologgers were installed even deeper at over 2000 metres.

Two more expeditions took place in 2010 and 2012, where more data was collected and new Leveloggers deployed. The trek in 2012 set a world record for deepest cave descent by the Lithuanian cavers. 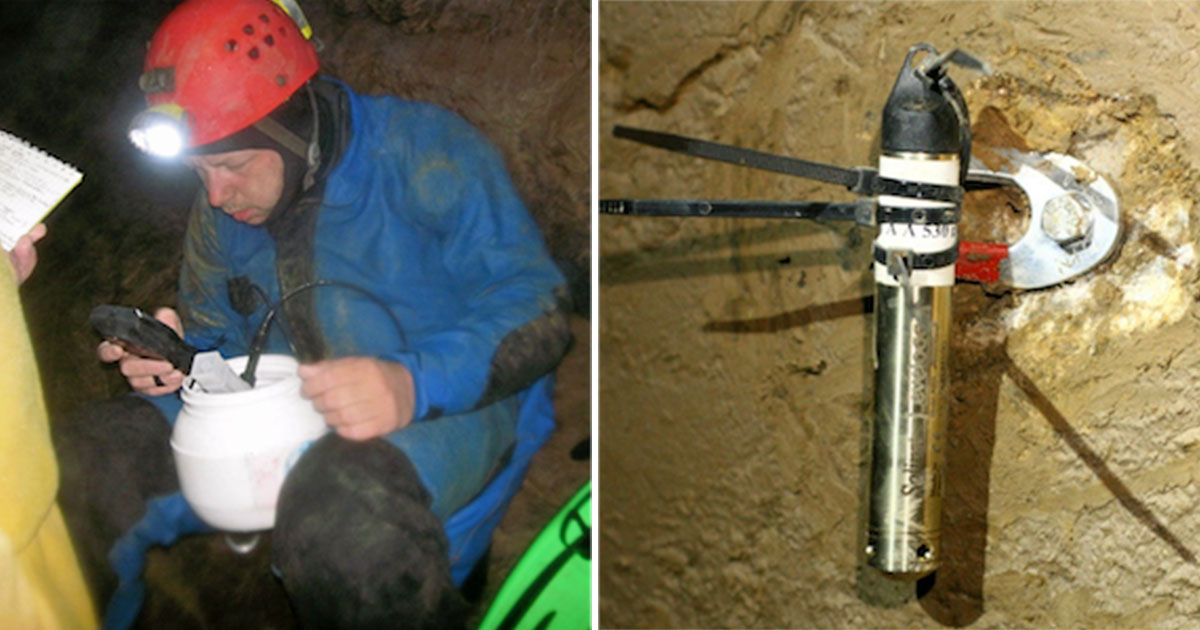 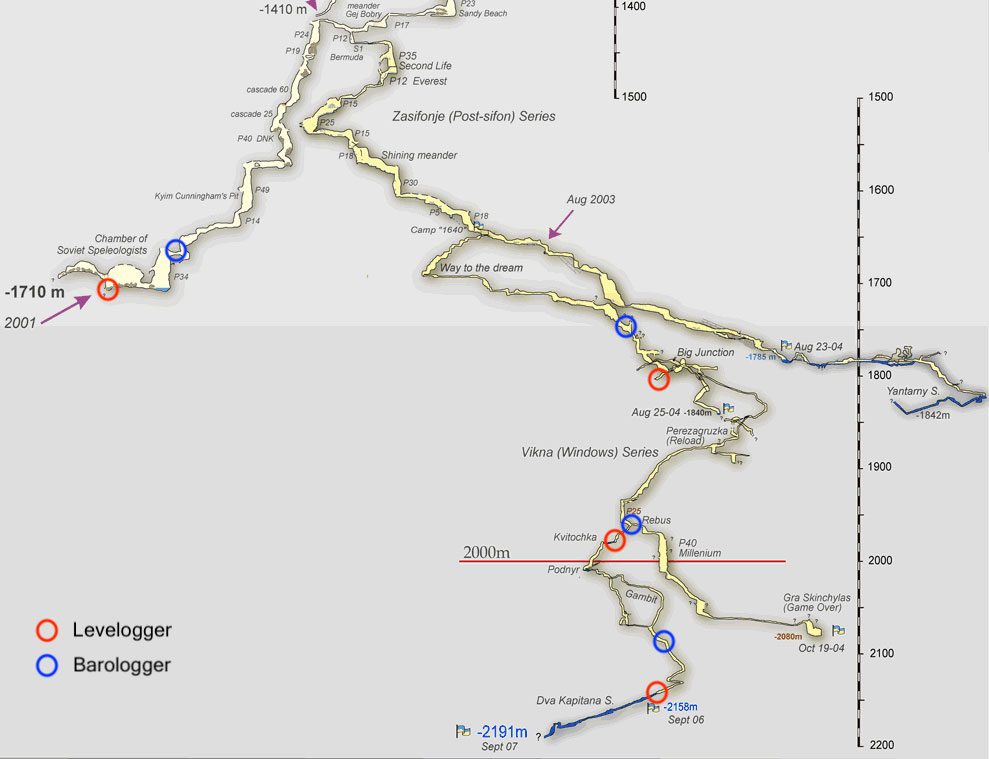 Levelogger and Barologger Placements in the Krubera Cave
(Source: http://www.neversleep.it/documenti-pdf/2009-Krubera-Voronja.pdf

For more details on these expeditions, and the journey “Towards the Centre of the Earth” visit the Gilyn project website.

Collecting water level data from these depths serves two primary purposes, the first and most important being safety. Actual hydrometric measurements taken within the cave systems provide information on the extent, interaction, and seasonal variability of flooding in the caverns.

Knowledge of the water level patterns allows explorations to be planned safely around periods caves are known to flood.

Another importance of gathering water level data is to add to the more-in-depth examination of these under-explored cave environments. The resulting data sheds some light on the complex hydrodynamic life in the caves and provides a model for cave geometry and hydroactivity.

Speleo (caving) expeditions to the deepest caves in the world are technically complicated and understandably carry many risks. Each data mining effort requires the organization of at least two expeditions: one for instrument installation and a second for data retrieval.

There are not only dangers to the lives of the cavers venturing to these depths and less explored areas, the loss or damage to expensive equipment is also a considerable issue.

Due to the magnitude of flooding and water entering the caves, equipment like Leveloggers can be damaged from excess pressure and become dislodged from their anchorage. There is also the chance of instrument vandalism.

After prolonged periods of deployment, it may be challenging to relocate the Leveloggers due to changes in the caverns over time, the small size of the instruments in the vast caves, and environmental and human factors—such as extreme fatigue!

Due to all the risks and complexities, any new data collected and every piece of information gathered is a significant success in itself!

In December 2018, Lithuanian cavers joined an international expedition to the Arabika mountain plateau in Gagra District, Georgia (https://www.rgo.ru/en/article/cave-was-previously-considered-third-depth-may-be-deepest-world). This time the exploration took place in the Sarma Cave, which is currently the third deepest cave in the world at over 1830 metres deep (https://wikimili.com/en/Sarma_cave).

It was during this exploration that Lithuanian caver, Gintautas Švedas, installed the new Solinst Leveloggers.

Gintautas Švedas Prepares the Dataloggers for Installation in Sarma Cave

The winter expedition was made more difficult and risky due to complicated access to the cave. Only a navigation mast installed during the summer marked the entrance to the cave. In addition, the weather was not ideal for flying the helicopters required to reach the remote location. 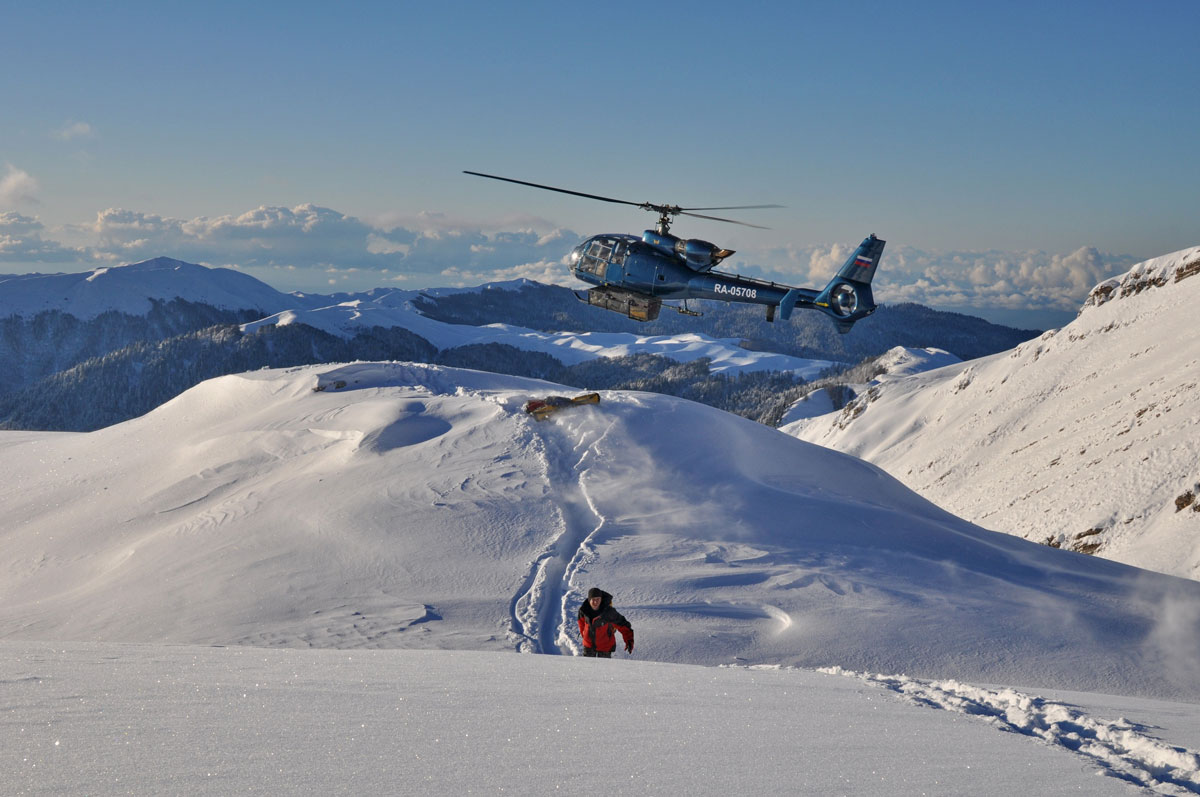 During the expedition, a subset of cavers worked on the surface to set up and maintain the infrastructure and security. A canopy prevented snowfall into the cave. Igloos were built for standby/emergency equipment storage and to house the expedition participants. Cavers at the surface were in charge of managing the hanging equipment and ropes at the top of the cave. 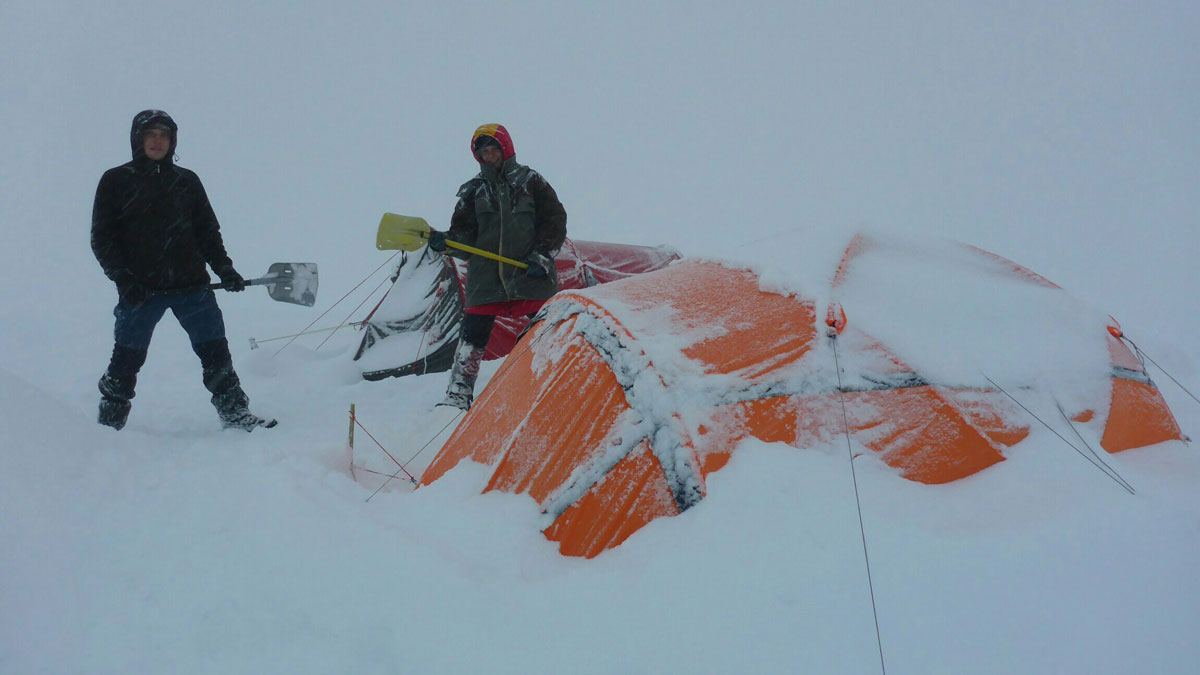 Cavers Preparing Camp at the Access to Sarma Cave 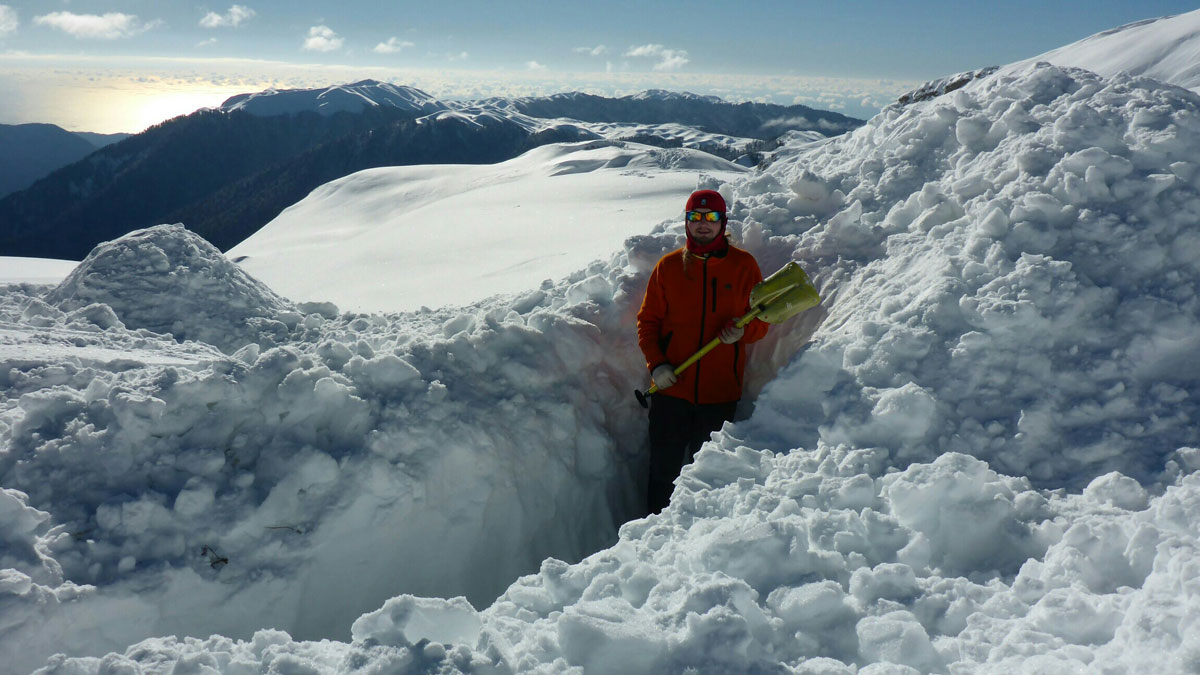 An Igloo Being Built at the Sarma Cave Surface Camp 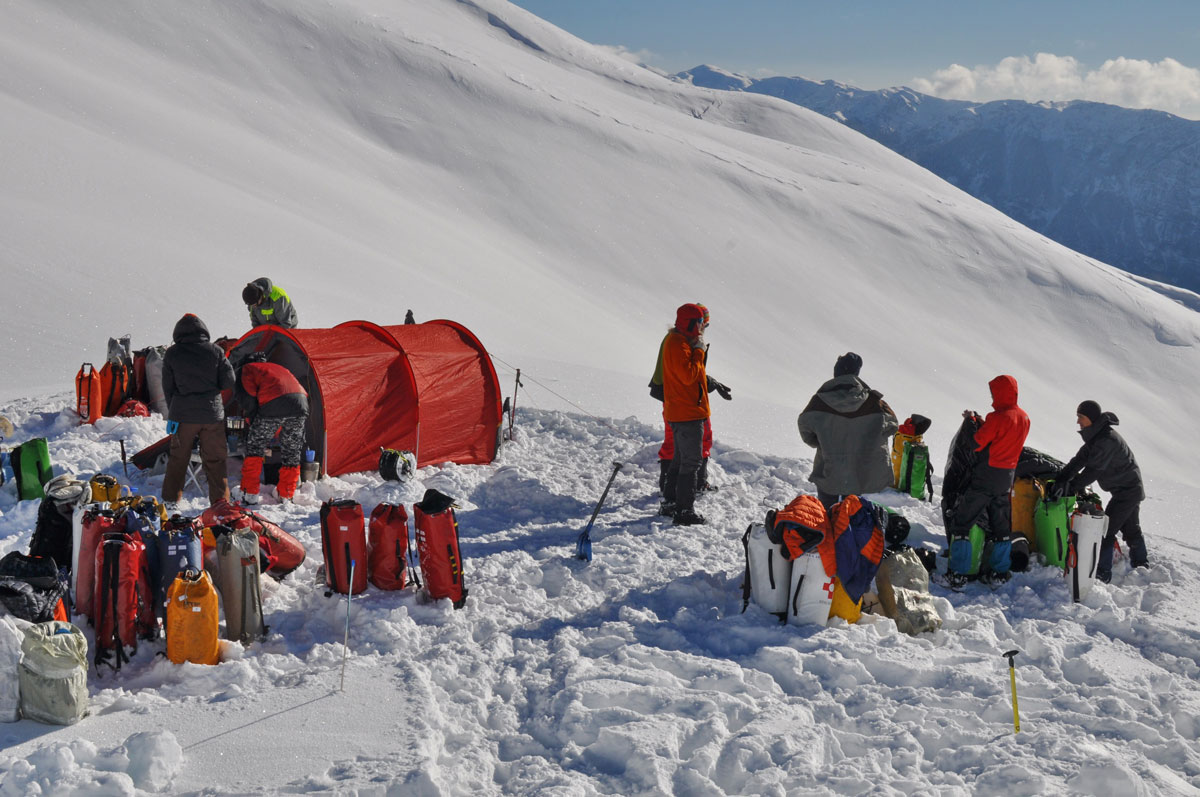 Cavers at the Surface Camp Before Entering the Sarma Cave

Exploration of the cave took place between December 3rd and 23rd, with a total of 12 days spent underground! 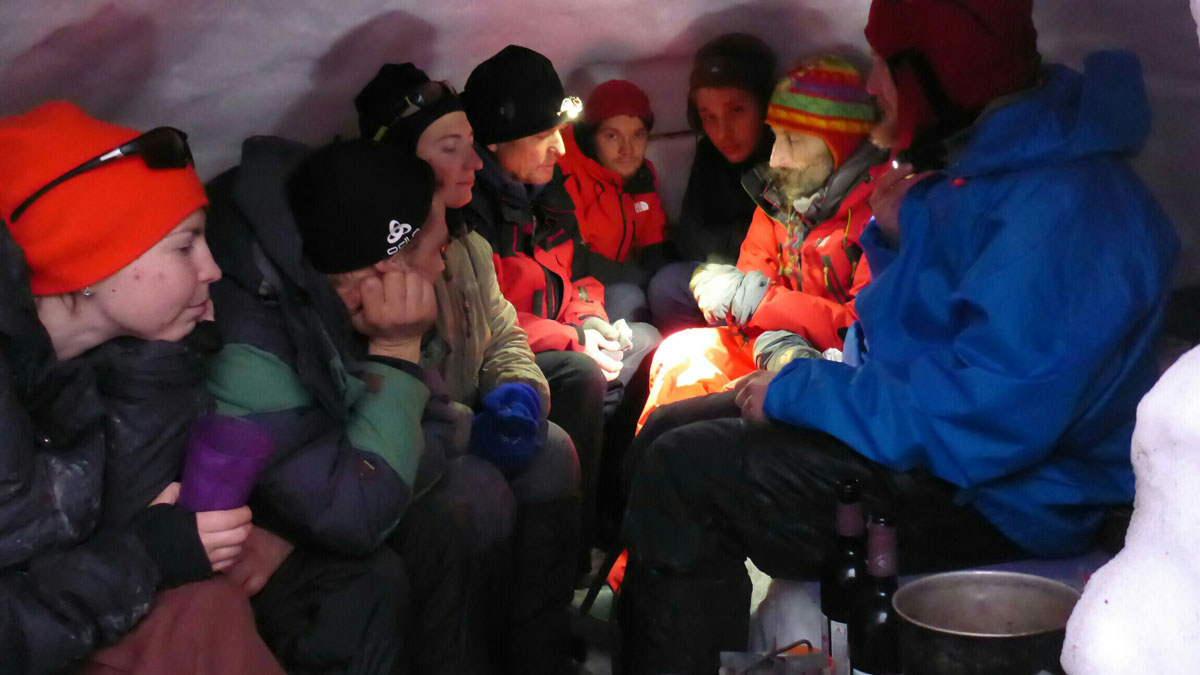 Expedition Participants in the Snow Kitchen After Completing the Cave Exploration

Within one to three years, there are plans for a new expedition to retrieve data and the Leveloggers from the cave.

Solinst thanks Gintautas Švedas of the Lithuanian Speleologists’ Club Aenigma and Bernardas Paukštys of Vandens Harmonija, the exclusive distributor of Solinst products in Lithuania, for providing the details of these projects.