Almost two thirds of the world's population lives within 400 km of the ocean shoreline; just over half live within 200 km, an area only taking up 10% of the earth's surface (Hinrichsen, 2007). Most of these coastal regions rely on groundwater as their main source of fresh water for domestic, industrial and agricultural purposes. As the world's population continues to grow at an alarming rate, fresh water supplies are constantly being depleted, bringing with it issues such as saltwater intrusion and increasing the importance of groundwater monitoring, management, and conservation.

Saltwater intrusion is a major concern commonly found in coastal aquifers around the world. Saltwater intrusion is the induced flow of seawater into freshwater aquifers primarily caused by groundwater development near the coast. Where groundwater is being pumped from aquifers that are in hydraulic connection with the sea, induced gradients may cause the migration of salt water from the sea toward a well, making the freshwater well unusable. 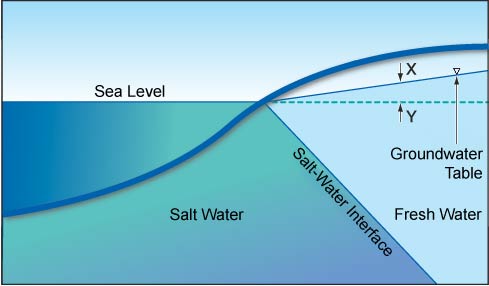 Salt-water interface in an unconfined coastal aquifer according to the Ghyben-Herzberg relation.

Saltwater intrusion into freshwater aquifers is also influenced by factors such as tidal fluctuations, long-term climate and sea level changes, fractures in coastal rock formations and seasonal changes in evaporation and recharge rates. Recharge rates can also be lowered in areas with increased urbanization and thus impervious surfaces. Intrusion has also occurred in areas because of water levels being lowered by the construction of drainage canals (Barlow, 2003).

Most incidents of saltwater intrusion occur in coastal regions, as has been the focus of discussion thus far, but inland areas can also be affected. Salinity issues in some regions surrounding the Rio Grande in New Mexico and Texas have been attributed to upwelling of deep-circulating groundwater, which is more saline due to natural underlying geologic formations (Doremus, 2008). The more saline groundwater is brought to the surface through pumping for irrigation and other uses. Similar occurrences have been noted in the Mississippi River Valley Alluvial Aquifer in Arkansas, where in response to pumping, there is also upward movement of saline water from deeper formations (Reed, 2002).

Incidents of saltwater intrusion have been detected as early as 1845 on Long Island, New York. Intrusion occurs in coastal aquifers worldwide, and is a growing issue in areas including North Africa, the Middle East, the Mediterranean, China, Mexico, and most notably, the Atlantic and Gulf Coasts of the United States, and Southern California. The increased use of groundwater has caused the salt-water interface to move inland and closer to the ground surface along much of the U.S. Atlantic Coast, as well as Southern California.

One third of the fresh water supply for the greater Los Angeles area comes from local groundwater sources. Over 10 million residents of L.A. County rely on these sources (Edwards and Evans, 2002). Because of rapid population growth, by the 1920's the overall flow of groundwater had reversed, leading to seawater entering some of the Los Angeles Basin coastal aquifers. In the 1950's three injection/barrier wells were installed in an attempt to stop the seawater from intruding. With such complex hydrogeology on the coast, these barriers were only partially effective. Current studies are attempting to map and understand the overall hydrogeology of the area, and efforts towards alternative solutions, such as desalination, are underway.

Since the early 1960's, the coastal aquifers of China have been studied for saltwater intrusion. With a transition zone of 1.5 to 6.0 km, and an aquifer area of more than 580 km2, the increasing extension of saltwater intrusion is a major concern in this area.

Methods and Instrumentation used for Investigation

Late in the 1960's, efforts rose toward drilling for chemical analysis of groundwater samples and the determination of flow patterns based on piezometric levels. Geophysical methods of investigation were introduced later, and were found to provide more information faster than the drilling techniques. Subsequently, geophysical methods became more important for saltwater intrusion monitoring.

Today, there are numerous methods available including: well logging, chemical analysis of groundwater samples, research into the interaction between aquifer matrix and groundwater, and most common, chloride concentration profiling, and vertical conductivity and temperature profiling.

An aqueous solution's ability to carry an electrical current by means of ionic motion is measured through conductivity. Salinity is the measured mass of dissolved salts (ions) in a solution. As such, conductivity readings provide a good indication of salinity. In general, as salinity increases, the total dissolved solids (TDS) of a solution increases, and so too does conductivity.

Conductivity is interdependent with temperature; therefore profiling both of these variables becomes an important factor when determining the behavior of the transition zone and the salt-water interface. 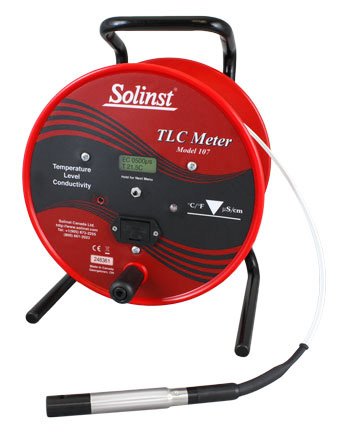 For example, using standard methods, a conductivity reading of 25,000 µS/cm and a temperature reading of 20˚C yield a salinity estimation of 17ppt (APHA et al, 2005). Through this method of investigation, borehole profiles of salinity can be used to track the fluctuation of the salt-water interface. This, in turn increases the potential to control saltwater intrusion problems. 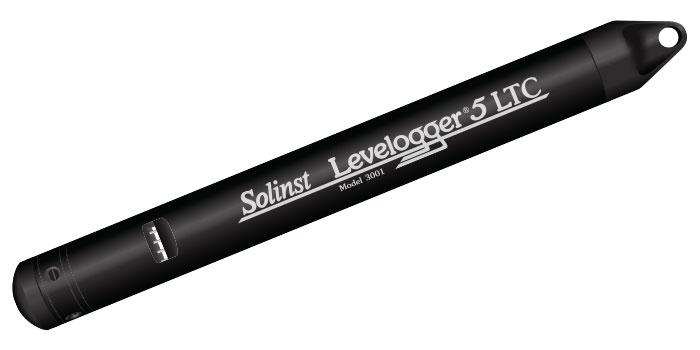 For continuous monitoring of the salt-water interface, an instrument such as the Levelogger 5 LTC allows accurate datalogging of conductivity along with temperature and water levels as often as every 2 seconds. The Levelogger 5 LTC is ideal for long-term saltwater intrusion monitoring applications due to its compact, low maintenance, waterproof design.

The Levelogger 5 LTC combines a datalogger, 8-year battery, memory for 100,000 sets of readings, pressure transducer, and temperature and conductivity sensors in a small 22 mm x 208 mm housing. It is simple to deploy, calibrate, and program.

To easily create a network of monitoring wells, the Levelogger 5 LTC can be integrated into a Solinstd Telemetry System, which allows convenient access to remote, real-time data. The STS Telemetry System sets alarms to trigger when a specific conductivity level is reached, notifying personnel of potential saltwater intrusion conditions. The Levelogger 5 LTC is also SDI-12 compatible and can be integrated into an SDI-12 or SCADA network.

By using an instrument like the Levelogger 5 LTC, the salt-water interface can be tracked over time, and provide real-time warnings when intrusion conditions occur or worsen.

One key to controlling saltwater intrusion is to maintain the proper balance between water being pumped from an aquifer and the amount of water recharging it. Constant monitoring of the salt-water interface is necessary in determining the proper management technique. In the past, many communities who came across a saltwater intrusion problem simply set up new production wells further inland. This only complicated the issue.

Since then, various methods have been employed to help alleviate the concerns of saltwater intrusion. Efforts towards the promotion of water conservation, and restricting withdrawals from coastal aquifers have been the focus in many areas. Using alternative freshwater sources has also been encouraged. Ocean water desalination plants are showing up in coastal regions around the world.

Where there are no other options for fresh water, efforts to maintain groundwater levels by ponding surface water and stormwater runoff, or using river water to recharge the groundwater table have been successfully implemented. Aquifer Storage and Recovery (ASR) systems can help restore aquifers that have experienced long-term declines in water levels due to over-pumping. 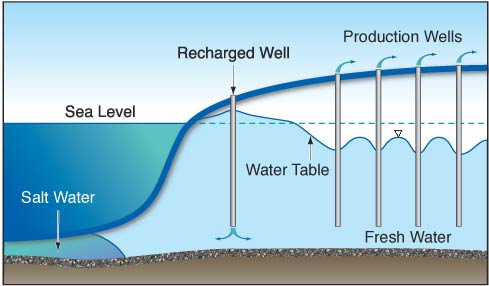 Other methods to control saltwater intrusion, such as using deep recharge wells, have also been successful. These wells create a high potentiometric surface, which allows for the pumping of groundwater below sea level landward of a groundwater ridge created. In some instances, barrier wells have been set up near the shore to pump out salt water and recharge a fresh water gradient toward the sea.

In all of these cases, hydrologic studies and water quality monitoring are essential to help better understand the movement and interaction of fresh water and salt water in the subsurface, and determine the best method to manage saltwater intrusion. Potentiometric surface mapping of an aquifer can provide important information determining the direction of groundwater flow within a confined aquifer. Plotting water level elevations on a map and contouring the results determines this. The contoured surface is known as the potentiometric surface, which is actually a map of the hydraulic head in the aquifer.