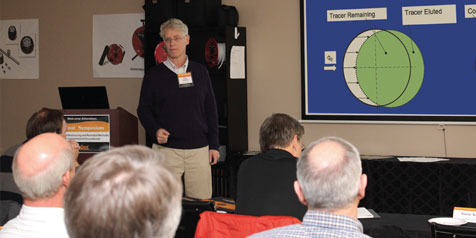 Contaminant mass flux is the measurement of the concentration and flow of contaminants from a source area, represented as mass per unit area per unit time. Contaminant flux measurements show how much, how fast, and where a contaminant is moving – more than you can get from traditional groundwater grab samples.

Kirk started his presentation by discussing the many uses of flux data at contaminated sites, including the following:

The basic design concept is a permeable cartridge that is placed in a screened well. A mesh tube in the cartridge is filled with a predetermined amount of sorbent/tracer mixture. When placed in a monitoring well, the PFM intercepts groundwater passively. The sorbent retains dissolved contaminants, and tracer is leached out. After a period of time, the PFM is removed from the well, and from the tracer remaining, tracer eluted, and contaminant sorbed, time-averaged contaminant flux and cumulative groundwater flux can be calculated.

Kirk presented case studies where the PFM has been successful in measuring a TCE source zone, uranium flux, microbial biomass flux, and where ambient tracers were successfully used. Kirk stressed that flux measurement should be combined with other traditional characterization and remedial assessment approaches to optimize the information obtained from a contaminated site.

ABOUT THE SPEAKER – Kirk Hatfield, Ph.D.
University of Florida

Dr. Hatfield received his BS and MS degrees from University of Iowa and his PhD degree from University of Massachusetts in Amherst.  Following graduation, he joined the University of Florida, Department of Civil Engineering in 1987.  He currently serves as the Director of the new Engineering School of Sustainable Infrastructure and Environment and Director of the Florida Water Resources Research Center and member of the Board of Directors of the National Institutes of Water Resources.  Dr. Hatfield’s ongoing research activities are in the areas of aqueous environmental monitoring, contaminant fate and transport modeling in the subsurface, environmental remediation, and water resources systems analysis.  Over the last ten years, research has focused on developing passive technologies for measuring water and contaminant flux in unconsolidated and fractured rock aquifers, in streams, and in the hyporheic zone. The Passive Fluxmeter (PFM) for monitoring unconsolidated aquifers gathered considerable local, national, and international interest as a technology that could provide stakeholders a cost-effective means quantifying the strength of subsurface contaminant sources (i.e., contaminant or nutrient loads) and the effectiveness of site remediation.  And as of 2011, PFMs were deployed to characterize over 60 contaminated aquifers at DoD, USEPA, NASA, and DoE facilities throughout the United States, and at sites in Canada, England, Brazil, Wales, France, and eight sites in Australia.  In addition, Surface Water Passive Fluxmeters (SPFM) were deployed in streams to measure water and nutrient fluxes in Brazil and Russia.  Dr. Hatfield’s research collaborations with universities and institutes in the in Russia, Brazil, Canada, and Austria have produced several patents and several technical paper awards in 1994, 1998, 2006, and 2011 from ASEE and ASCE and from the editorial board of the most cited journal in his discipline, Environmental Science and Technology. In 2006, the Department of Defense awarded Dr. Hatfield and his colleagues the distinguished “Project of the Year Award” for their research to demonstrate and validate a new technology that provides direct measures of water and contaminant fluxes in subsurface aquifers.