With the help of our Model 703 Waterloo Emitter Operating Principles video series, let’s review how the Waterloo Emitter works, some tips for application, and the advantages it provides to remediation professionals.

The Waterloo Emitter has been shown to be very effective at cleaning up sites contaminated with petroleum hydrocarbons, so let’s focus on how adding oxygen into the subsurface enhances the remediation of these sites.

(If you’re interested, here’s a case study featuring a petroleum-contaminated site that was cleaned-up in less than six months: www.solinst.com/onthelevel-news/2009/03/remediation-gas-station-site-6-months/)

Many options exist for remediating petroleum-contaminated sites, but more often, methods that enhance the natural attenuation processes are being applied.

Aerobic bioremediation is the breakdown of contaminants by existing (or introduced) microorganisms in the subsurface. The presence of oxygen encourages the growth of the microorganism, increasing the decomposition of the chemicals into less toxic by-products.

Research and practical application have proven enhanced aerobic bioremediation to be very affordable and efficient in cleaning up petroleum-contaminated sites.

In addition to potentially speeding up remediation, enhanced bioremediation methods are usually simpler and less invasive to existing site conditions. Because of this, enhanced aerobic bioremediation has gained acceptance from regulators as a viable option for remediating petroleum hydrocarbons in groundwater.

The Waterloo Emitter was originally developed by the University of Waterloo, and is now manufactured by Solinst. The Emitter consists of a 51″ long PVC frame wrapped with silicone or LDPE tubing. Emitters are sized to fit 2″- 6″ wells. A pressurized air or pure oxygen tank is used to supply oxygen to the tubing.

Single or multiple Emitters can be installed in screened wells or open boreholes. They can be placed vertically or horizontally in a series of wells to ensure full coverage of the contaminant plume. When placed in a well, the Emitter’s design allows water to flow through and around the device, providing good contact with the tubing, thus maximizing diffusion of oxygen into the groundwater.

Watch the first video in our Waterloo Emitter series to learn about the radius of influence of Emitters and the ideal positioning to ensure full capture of the contaminant plume:

Maintaining the right supply of oxygen to the subsurface, for a sustained period, is a limiting factor of  some enhanced aerobic bioremediation technologies. The Waterloo Emitter overcomes this, as the oxygen supply is replenished constantly.

Because groundwater flow around the Emitter is continuous, as is the flow of oxygen through the Emitter tubing. An equilibration point is never reached. This results in steady diffusion of dissolved oxygen into the groundwater without any decrease in concentration. This regulated supply is critical in preserving and enhancing the natural in-situ microbial population.

View the next video in our Waterloo Emitter series to see how a constant supply of oxygen is supplied to the Emitter tubing and diffused into the groundwater:

Operating principles of the Waterloo Emitter are based on Fick’s Laws of diffusion. Movement of a substance across a polymeric membrane occurs from an area of higher concentration to an area of lower concentration.

When oxygen is introduced into the Emitter tubing and placed in contact with groundwater, a concentration gradient is set up between the inside of the tubing and the groundwater. This gradient pushes molecular oxygen through the tubing in a controlled manner, where it is immediately available to microorganisms in the surrounding groundwater.

Watch the final video in our Waterloo Emitter series to see the Emitter’s operating principles in action, and how overtime, contaminant levels in groundwater are reduced through enhanced aerobic bioremediation:

Due to reliance on groundwater flow, Waterloo Emitters may be more effective in permeable conditions, such as in sands or gravel. In addition, Waterloo Emitters tend to be used outside the more heavily contaminated areas of the plume source zone, as they work well at remediating mid-weight petroleum products.

Waterloo Emitters work in-situ and have the advantage of being able to be used along side other more aggressive, traditional remediation practices. This was the case at a Central Ontario site, where they were used to create a barrier to manage a migrating dissolved phase: www.solinst.com/onthelevel-news/2013/04/waterloo-emitters-provide-ongoing-solution/

Emitters have also been used as the primary tool for cleaning up a contaminated site, and installed as part of a multi-phase approach. For example, Emitters have been used for “polishing” a site after a primary treatment, and combined to complement other saturated zone remedial technologies (e.g., air sparging) and vadose zone remedial operations (e.g., soil vapor extraction, bioventing). Emitters can also be used to biostimulate a site after it has been injected with microbes or other chemicals.

Advantages of the Waterloo Emitter

Waterloo Emitters can have many advantages when compared to conventional remedial approaches.

Traditional excavation or pump and treat technologies usually require more expensive and energy-consuming equipment. Typically, the treatment of this groundwater is done ex-situ or offsite. This can be disruptive to other site activities. In contrast, Waterloo Emitters work in-situ, and harnesses existing environmental conditions to remediate contaminates in place. 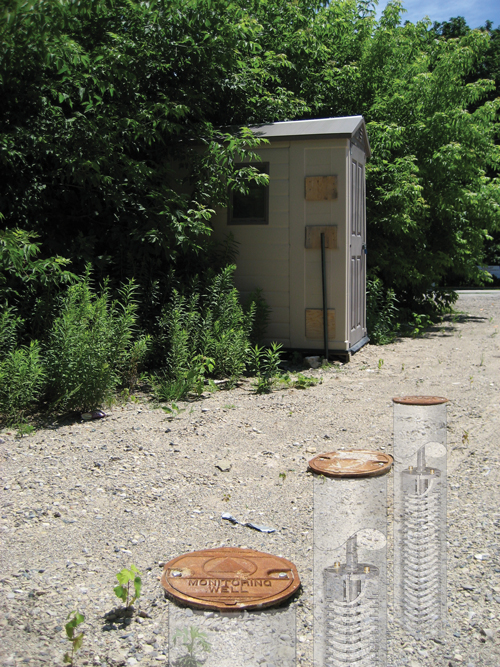 Waterloo Emitters Installed in a Series

Compared to other oxygen delivery techniques, Waterloo Emitters provide immediate bioavailability of molecular oxygen to microorganisms. A constant supply can also be more easily maintained. There is no oxygen lost due to bubbling, there are no slurries or chemicals to deal with, inject, or misapply, and no waste products are produced.

Contaminated sites are complex, and cleaning them up does take an integrated approach. The Waterloo Emitter provides remediation professionals with an option to potentially help make contaminated groundwater cleanups faster, more effective, and less expensive.