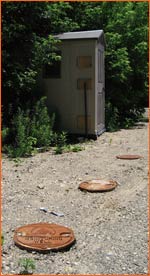 Vertex Environmental Inc., located in Cambridge, Ontario, specializes in the in-situ remediation of contaminated groundwater. In 2007 they were contracted to clean up a former gas station site in Guelph, Ontario. The contaminant plume containing gasoline and diesel occurs in unconsolidated silty sand to a depth of approximately 3 m (10 ft). The initial plume stretched 30 m (100 ft) long and 15 m (50 ft) wide. Migration towards down gradient receptors was a concern, therefore a solution that worked quickly and effectively was required to help eliminate the potential for exposure. Waterloo Emitters were chosen for the site to diffuse oxygen into the contaminant plume, thereby enhancing the natural biodegradation of BTEX and Petroleum Hydrocarbons (PHCs).

A total of 14 Waterloo Emitters using LDPE tubing were installed in 4″ wells screened at and below the water table. Emitters were placed to form a “fence”

along the down gradient property boundary to cut off the contamination plume. Dried air containing 21% oxygen was released through the tubing into the plume to provide immediate bioavailability of molecular oxygen for aerobic biodegradation.

During the remediation process, Dissolved Oxygen (DO) samples were collected on a monthly basis and groundwater samples for BTEX and PHCs were collected quarterly from down gradient wells. Within one month of the installation, DO levels in the monitoring wells increased an average of 880%. Initial PHC levels were a maximum of 27 mg/L (average 9.6 mg/L). Within six months, results showed that the levels of BTEX and PHC had dropped below the analytical detection limit, meeting the Soil, Ground Water and Sediment Standards of the Ontario Environmental Protection Act, thus enabling the Emitter system to be decommissioned just one year after installation.

Acknowledgement: Solinst thanks Rick McGregor of Vertex Environmental Inc. for providing the details of this application.