An aquifer in Central Ontario became contaminated with BTEX and PCH F1 (Petroleum Hydrocarbons – Fraction #1i) from leaking underground infrastructure linked to a gas station. The groundwater in the aquifer flows between 3 -13 meters a year, as such, a voluntary cleanup of the aquifer was initiated to remediate the plume source, and to stop the dissolved plume phase from moving off-site. 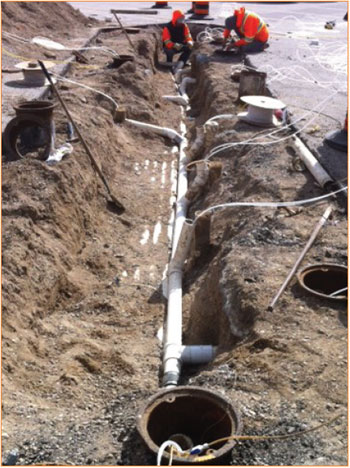 It is a commercial site, so the client needed a solution that was not highly visible and had minimal site disturbance, or disruption to normal site activities. Because the dissolved plume is located deep within the subsurface, and after initial geochemical testing showed that the plume was oxygen-limited, the Solinst Waterloo Emitter was chosen as the primary remedial device for the dissolved phase plume.

The Water Emitters were installed in 4″ PVC wells that had screens across and below the water table, with allowances for seasonal fluctuations. 3.8″ diameter Waterloo Emitters were used, some with LDPE tubing, while in the higher flux areas of the plume, more diffusive silicon tubing was used. Oxygen is supplied to the Emitters using cylinders stored in a secured shed at surface.

The results have been “extremely good”, according to Rick McGregor of InSitu Remediation Services Ltd. The system was originally designed to treat Petroleum Hydrocarbon concentrations of about
5,000 μg/L, yet the system has effectively treated 3 times that. In addition, maintenance has been kept to a minimum, and iron precipitation found on the Emitters has not affected their function.

Independent consultants have been monitoring the performance of the Emitters on a quarterly schedule. They collect samples of groundwater down and up gradient, which are analyzed for a variety of inorganic and organic parameters.

The client and InSitu Remediation Services have been very pleased with the results: “The Emitters have provided a cost-effective and robust method for delivering oxygen to the PHC plume while minimizing [operation and maintenance] costs. The system continues to be as effective 3 years after installation as it was on Day 1 with no increase in costs”.

i“Fraction” refers to the equivalent normal straight-chain hydrocarbon (nC) boiling point ranges (Fraction #1: nC6 to nC10) according to the CCME, 2008.

Solinst thanks Rick McGregor, of InSitu Remediation Services Ltd, for providing the details of this project.