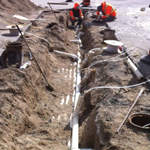 An aquifer in Central Ontario became contaminated with BTEX and PCH F1 (Petroleum Hydrocarbons – Fraction #1i) from leaking underground infrastructure linked to a gas station. The groundwater in the aquifer flows between 3 -13 meters a year, as such, a voluntary cleanup of the aquifer was initiated to remediate the plume source, and to stop the dissolved plume phase from moving off-site. Continue Reading » 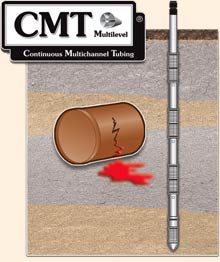 Solinst CMT® Multilevel Systems provide a cost effective solution for identifying and monitoring leaking underground storage tank (LUST) sites. They monitor multiple depth-discrete zones in a single borehole, providing complete data sets that quickly identify sites that pose a threat to down-gradient receptors, and those that can be closed with no further action. With strong political… Continue Reading »