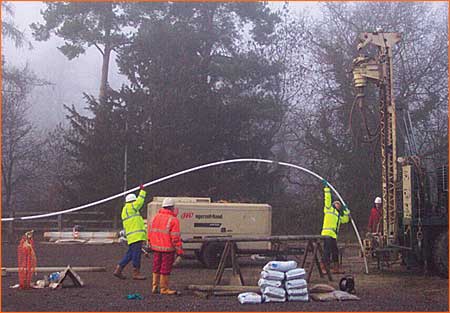 White Young Green Environmental Limited (WYG) is an experienced environmental consulting firm operating in the United Kingdom. WYG was given the task of developing a cost effective means to isolate and reliably sample groundwater quality, and obtain hydraulic head data from various zones, in a complex geological setting, to give detailed vertical gradients. The investigation took place at a former landfill site in Southern England that was destined for commercial re-development.

The project’s scope was largely driven by environmental contamination. Traditional groundwater monitoring approaches were considered, but nested and clustered wells, proved to be either expensive or, in the case of nested wells, unreliable. WYG selected the Solinst 7-Channel CMT(Continuous Multichannel Tubing) as a more suitable option, installing a total of 19 Systems between 10 m and 25 m (33 ft and 82 ft) below grade. Five to seven screened zones were monitored in each of the 19 Systems. These screened ports were surrounded by approximately 0.5 m (20″) of sand and isolated using layers of bentonite between the sand packs.

WYG found that experienced personnel were able to construct a seven port CMT System in approximately 30 minutes. Although initial material costs to install the CMT Systems were higher than the nested well option, it was concluded that had WYG attempted to gather data of the same reliability using nested wells, if at all feasible, the estimated time on site would have been two to four times longer. In summary, a substantial cost savings was realized due to the reduced drilling and installation time using the CMT system versus traditional nested installations. This was complimented further by reducing the site engineers required time in the field supervising the installation.

Although still in the early stages of data interpretation, the quality of the data provided by the CMT installations appears to be consistent. WYG indicate that using CMT Systems has allowed for a much more detailed understanding of groundwater flow characteristics, identifying multiple contaminant plumes in this application. The high resolution data provided by CMT systems was instrumental in assisting the study team to determine the complex groundwater flow regimes on site.

Acknowledgements: Solinst Canada wishes to thank Jason Morrissey of WYG for providing the details and assessment of CMT system performance in this project, and Waterra UK for theirtechnical assistance.