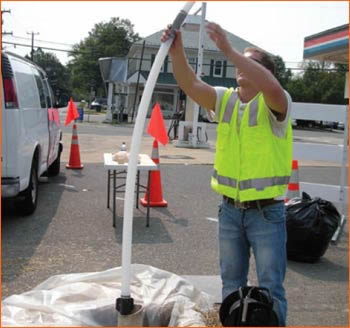 CMT System being installed in a monitoring well

In a town in the Piedmont physiographic province, in the mid Atlantic, a proposed water supply well was contaminated with methyl tert butyl ether (MTBE). The well is located down gradient of several gas service stations with multiple known sources of MTBE. As such, a remedial effort was required by Virginia Department of Environmental Quality to clean up the gas station sites in order to protect the well from further contamination.

Gannett Fleming, an engineering consulting firm, was retained for investigation and remediation work at one of the service stations. As part of the VA DEQ corrective action process, Gannett needed to develop an on-site MTBE remedial endpoint. The geology of the site consists of silty sand overlying fractured rock. Due to this complex geology, as well as the presence of multiple MTBE sources in the town and general lack of hydrogeological data, the use of a numerical or analytical model was determined to be unsuitable. The mass flux model was selected to be the most appropriate method to calculate on-site cleanup levels protective of the down gradient potable well.

Mass flux is an estimate of the rate of mass flowing through a cross sectional area in groundwater, measured in unit of mass per time (grams per day). To calculate mass flux, a transect of monitoring wells perpendicular to groundwater flow is required to define the vertical and horizontal extent of a contaminant plume over time. To accurately determine the mass flux of this site, CMT multilevel monitoring wells were installed across the site to delineate MTBE concentrations.

Beginning in April 2006, water elevation measurements and groundwater samples from each of the zones in the CMTs were taken quarterly. A peristaltic pump with 1/4″ ID polyethylene tubing was used to purge and sample the zones.

With mass flux values successfully calculated, remedial activities began in 2007. Groundwater extraction was started in 2007 and soil vapor extraction in 2008. Currently, the CMT wells continue to be gauged and sampled every three months to monitor mass flux during the on-going remediation efforts.

Acknowledgments: Solinst thanks Kenneth T. Guttman and Donna K. Beares of Gannett Fleming for providing the details of this application