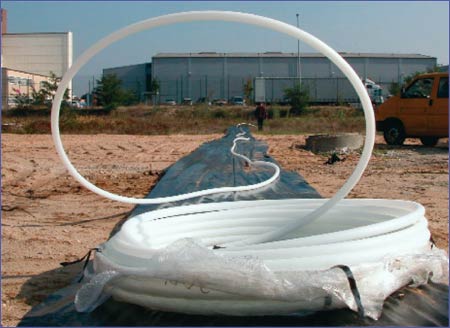 Contaminants were identified in the subsurface at Rhine Main Air Base, Germany, in a sand and gravel aquifer. The contamination was complex due to two separate sources: a fire training pit, and a former gas station that had leaked various compounds, including BTEX, TPH, PAH, and TCE. The aquifer extends from 7 m up to 40 m below ground surface, with static levels varying from 6-10 m over the site.

In 2005, the consulting group, Peschla & Rochmes, was retained to further define and monitor the contaminant plume. Their focus was to investigate the vertical and spatial distribution of the contaminants, and to better quantify vertical groundwater flow. Based on the following advantages, a multilevel monitoring system was determined to be the best option for this site investigation:

A comparative analysis of multilevel systems resulted in the CMT system being selected for this project. The 7-channel CMT system was installed in 16 locations on the site, 6 of which monitor the pit and gas station areas. During drilling, core was collected to determine port locations, which were placed at approximately 8, 12, 17, 22, 27, 32, and 36 m. The tubing was installed in boreholes, and completed using sand around the ports and grout injected to seal between monitoring zones. A Tag Line was used to accurately place and confirm the thickness of sand and grout during construction.

The Mini Inertial Pump was chosen as the sampling device for this application, as it is inexpensive and very easy to operate. As HDPE tubing is susceptible to both positive and negative biases caused by sorption, desorption, and diffusion by many of the target contaminants, a sampling protocol was developed. Channels were purged prior to sampling, and separate 0.25″ Teflon® tubing was used to obtain samples. The CMT system was able to provide valuable data on vertical and spatial distribution of the contaminants and their concentrations, as well as vertical flow gradients.

In addition to the benefits of superior data collection, a comparative analysis showed that the CMT should provide significant cost savings. The comparison was performed by looking at the cost to place 4 single wells, with either 6″ or 2″ pipe, versus the CMT system. Estimates for both well construction and sampling showed significant savings in both areas, up to 40% in construction costs and 65% in sampling costs using the CMT. In actuality, the sampling savings were not as significant as hoped in this case, due to turbid samples.

The study concluded that the CMT was a valuable tool in the assessment and monitoring of the site. The system not only provides excellent data, but also considerable cost savings.

Acknowledgements: Solinst would like to thank Mr. Kropp of Peschla & Rochmes and Hans Weiss from IMW Innovative Messtechnik Weiss, for providing data, and details on the project and system performance for this newsletter.