Since 2002, Solinst has been working with STS Consultants in Green Bay, Wisconsin to provide a total of four Waterloo Multilevel Systems selected to monitor a chlorinated compound release. The release was from a forest products company and occurred decades ago. Chlorinated compounds have permeated the saturated and unsaturated zones and are present in both the overburden and bedrock on site.

The installation of four Model 401 Waterloo Multilevel Systems was conducted as part of a phased investigation. Jim Kauer from STS explains that initially the Solinst Model 425 Discrete Interval Sampler was used to obtain groundwater samples from a 430 ft conventional borehole, enabling identification of zones that contained impacted groundwater. This information combined with geophysical data provided the needed information to design the first of four Multilevel Monitoring Systems. 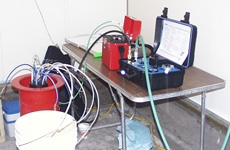 The Solinst Waterloo Systems have been installed on or around the site at depths ranging from 430 ft to 790 ft, with most systems monitoring a total of 7 zones. At each zone, ports in the monitoring system were constructed with Double Valve Pumps for groundwater sampling and Vibrating Wire Transducers to measure level fluctuations. The last installation was just completed in March 2006.

The Systems were used to collect representative samples of groundwater for laboratory analysis. STS found that the analysis provided repeatable results. Based on the information collected from the Multilevel Systems, the sampling of conventional wells, and both surface and borehole geophysical testing, a phased remedial approach has been implemented. Interim remedial action consists of pumping of the groundwater from several monitoring wells followed by air-stripping to permit discharge to a treatment facility. Data has demonstrated that degradation of the compounds is occurring through natural attenuation processes. Remedial activity to enhance this process is planned in the coming months.

In addition to providing detailed 3-dimensional data to better characterize this site, the selection of the Waterloo Multilevel Systems has resulted in considerable cost savings for this project. Single boreholes, with multiple monitoring zones, versus clustered conventional wells reduced drilling by over 9000 ft.

Acknowledgement: Solinst would like to thank Jim Kauer of STS Consultants in Green Bay, WI for providing details on the project and equipment performance for this Newsletter.