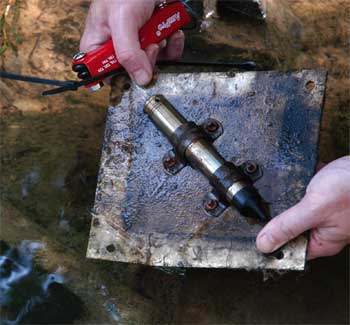 Levelogger installed flush with the streambed

Over the last two years, researchers in the Department of Civil and Environmental Engineering at the University of Louisville have been conducting an extensive assessment on a stream in Oldham County, Kentucky. The stream, which can be classified as “headwater”, has a drainage area of about 2.8 square miles (7.2 square kilometers) at the upstream end. The purpose of the assessment is to collect data which will aid in the design and define the objectives of a stream restoration project. The main channel to be restored is approximately 2,700 feet (825 m) long, with several small tributaries.

A number of Solinst Leveloggers are being used at various locations along the project site. Two monitoring wells adjacent to the main channel are each equipped with a Levelogger Gold to record the changes in groundwater levels, every 15 minutes. Three Leveloggers are located in the channel bed to monitor flow levels with time. The Leveloggers are attached to metal plates, which are bolted to concrete blocks installed flush with the streambed. They are set to record every 5 minutes. Groundwater and stream flow readings are being correlated to assess the interaction between flow in the channel and flow in the aquifer.

Of these Leveloggers installed in the streambed, one is set next to a turbidity probe and a water sampling device used to collect suspended sediment samples and turbidity readings. In addition to flow measurements taken with an ADV (Acoustic Doppler Velocimetry) device, this data is being used to build a stage-discharge relation for the site. 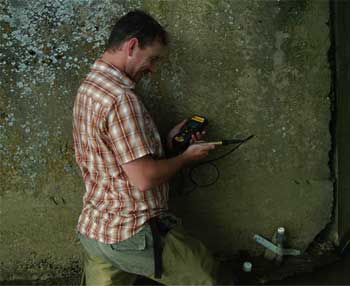 Leveloggers are also stationed on the abutments of two bridges along the main channel. They are set inside vented PVC tubes, and are also used to measure flow levels. The data collected from these and the other Leveloggers in the streambed were used to calibrate a 1-dimensional flood study model. Modeling the effects of the project on the 100-year flood elevations along and adjacent to the channel is a permitting requirement for the restoration project.

During the assessment, the Levelogger data is being downloaded in the field using a Leveloader Gold data transfer device. Researchers are also using a Barologger Gold at the site to obtain barometric pressure readings to compensate the Levelogger data.

Once the restoration is complete, the data collected during the assessment period will be compared with monitoring data to evaluate the efficacy of the design and construction techniques. Construction for the project started last fall.

Acknowledgement: Solinst thanks William S Vesely, of the University of Louisville for providing the photos and details of this project.