From April 2013, through December 2013, a Levelogger Edge was used in an Antarctic Tidal Study to monitor sea level fluctuations in the Davis Sea, Antarctica. A unique monitoring setup was implemented for the successful installation of the Levelogger Edge in these extreme climatic conditions.

A monitoring shaft was created in the shore ice just off the coast of Antarctica. A special insulated housing was constructed over the shaft, which contained a support beam and a heating element (see Figure 1). The Levelogger was suspended inside a protective pyramid, which was tethered to the support beam in the housing (see Figure 2). A weight was connected to the rope that supported the pyramid, to help hold the pyramid in place at the bottom of the sea (approximately 3-4 m deep) during monitoring. 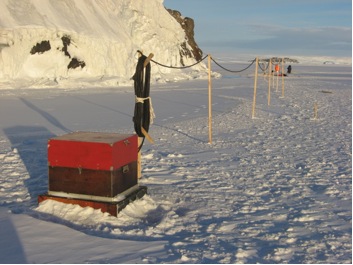 After the shore ice formed, the installation was completed on April 8, 2013. A protective latex balloon filled with an ethyl alcohol solution was secured to the bottom of the Levelogger to protect its pressure sensor (see Figure 2). The Levelogger was deployed with a sampling rate of 1 hour. It was brought to the surface each month to download the logged data. Data downloading and redeployment was completed within the hour, to preserve the hourly readings for the entire monitoring period. 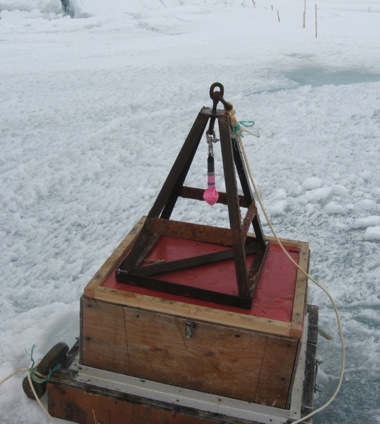 Figure 2. Levelogger Edge Installation Weight with Pressure Sensor Protected by Balloon Filled with Ethyl Alcohol Solution. This Assembly Rests on the Sea Floor Under the Ice.

Eight months later, on December 20, 2013, the Levelogger was removed and the final data downloaded. The water level readings were compensated using hourly sea level barometric data obtained from a nearby weather station.

A separate tidal gauge was used to simultaneously record the water level fluctuations. When the data from the tidal gauge and the Levelogger Edge were compared, the correlation was excellent. The extent of tidal fluctuations could be clearly seen from the documented data.

This application demonstrates that the Levelogger Edge can be successfully used in extreme climate conditions – when the proper precautions and careful design considerations are followed.

Acknowledgement: Solinst thanks Gennady Rogovsky from LNDC Company and Vasily Leontiyevich Kuznetsov of the Arctic and Antarctic Research Institute for sharing the details of this project.