The U.S. EPA’s definition of HRSC is: “High-resolution site characterization (HRSC) strategies and techniques use scale-appropriate measurement and sample density to define contaminant distributions, and the physical context in which they reside, with greater certainty, supporting faster and more effective site cleanup.

In other words, the more spatially and temporally diverse your data sets are – the more representative they are of the actual site conditions. Using technologies that collect data from zones that are more closely spaced together provides a higher resolution picture of the subsurface. This gives you a better understanding of how to go about remediating a contaminated site.

The new HRSC section is very helpful – it describes what HRSC is, why it should be used, and how it is conducted. It offers tools and techniques for performing high-resolution site characterization, case study examples, and training and support options.

However, it is missing what many in the hydrogeological industry would consider an important part of the tools and techniques discussion…Multilevel Systems (MLS).

Note: There is a brief mention of continuous packer/liner sampling systems (another term for a specific type of system that can be used for multilevel monitoring), but very little detail is provided.

Multilevel Systems, also often referred to as engineered nested wells, are installed in a single borehole, but are constructed with multiple ports to provide samples and hydraulic head measurements from many isolated depths within the single borehole. With a series of MLS, a contaminated site’s groundwater can be assessed on a four-dimensional scale: level, type, and lateral and vertical extent of contamination – this is high-resolution site characterization! 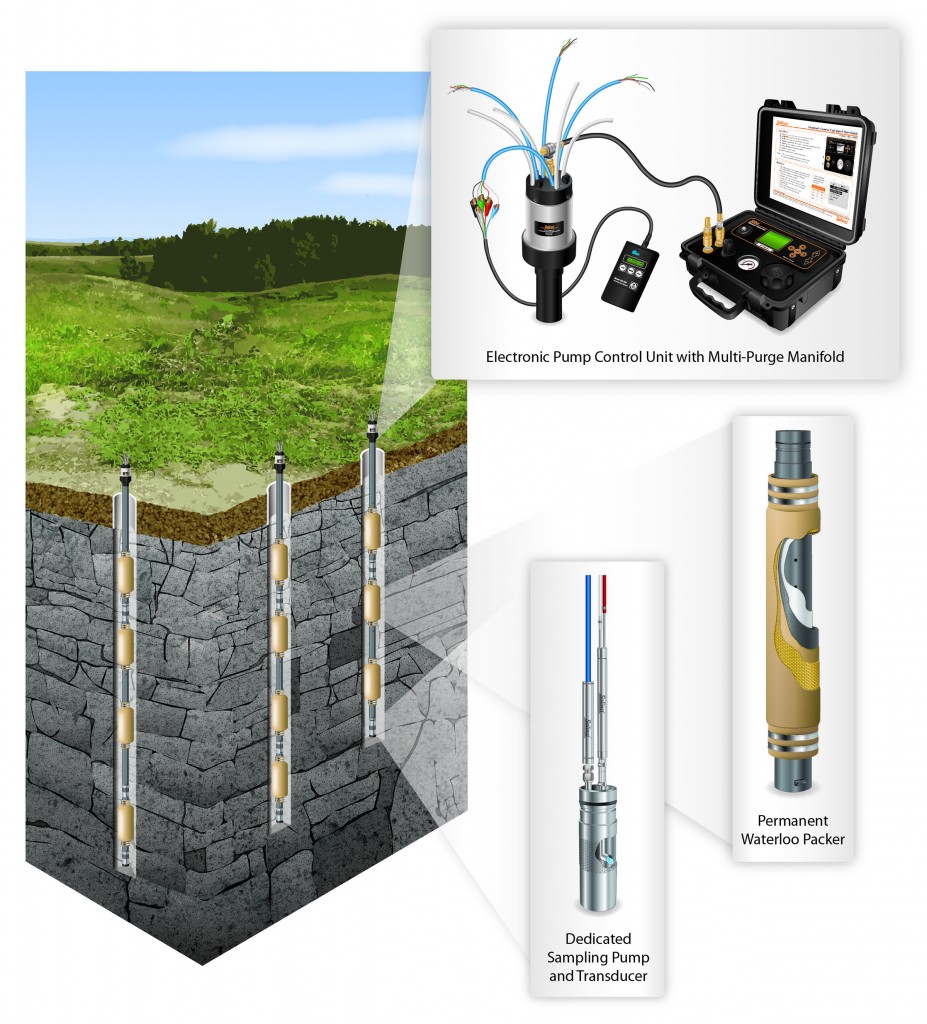 Solinst has manufactured the Model 401 Waterloo Multilevel System, since 1984. The System uses modular components of various casing lengths, sampling ports, and optional packers that are connected to form a sealed casing string. This design gives excellent flexibility, allowing placement of ports and packers to suit borehole logs. Pumps and/or transducers can be dedicated to each port. All instrument tubing and cabling is contained within these modules and collected at the top of the system at a wellhead manifold. The Waterloo System is ideal for long-term monitoring in bedrock and cased boreholes, and has been used to depths of 1000 ft. (300 m). 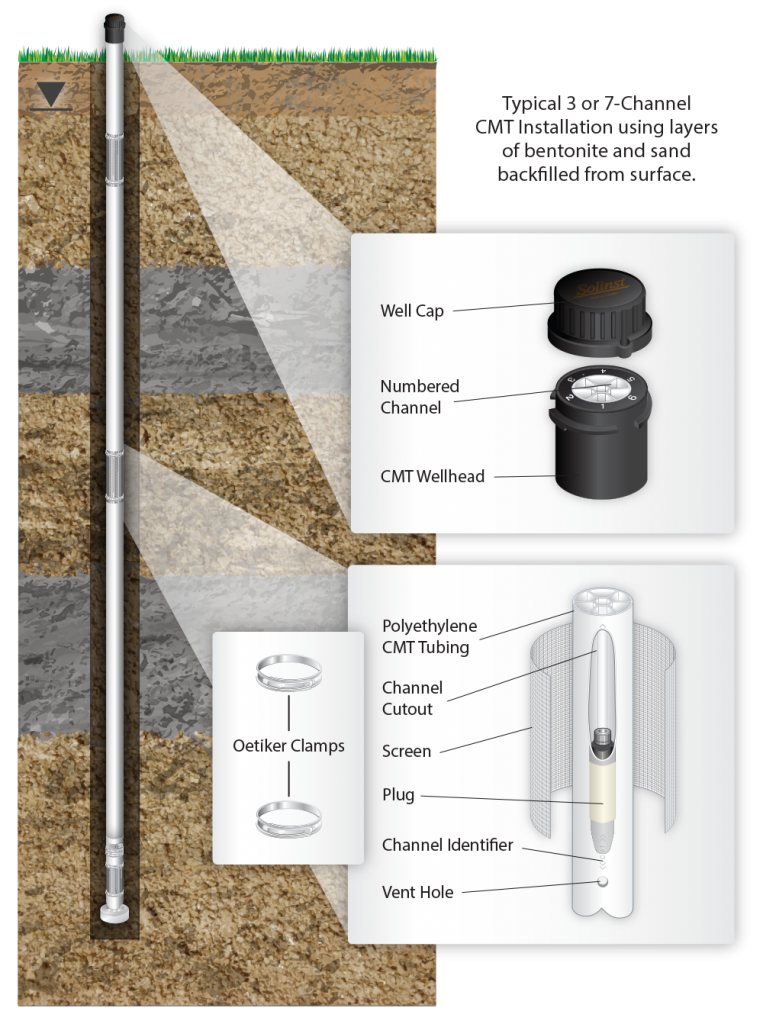 Since 1999, Solinst has manufactured the Model 403 CMT Multilevel System. The CMT System consists of continuously extruded polyethylene tubing with seven or three separate channels running the length of the tubing. Monitoring zones are mechanically created and sealed off, one in each separate channel at different vertical intervals. CMT offers in-field design flexibility, is low cost and easy to install. The number of monitoring ports, port locations, install depths, and monitoring strategy, can all be accommodated and finalized on site. The 7-Channel System is 1.7″ (43 mm) and the 3-Channel is 1.1″ (28 mm). They are ideal for shallow applications in narrow diameter boreholes.

What are the advantages of using Multilevel Systems in High-Resolution Site Characterization?

These multi-port systems are engineered with hydraulically isolated short-screened intervals. The seals between zones are reliable, overcoming issues of cross-contamination between aquifers or between different layers within the same aquifer (which are noted issues with cluster and nested wells). The shorter screened intervals provide the true groundwater chemistry at each zone and eliminate the issue of chemistry and head being averaged across long screens (typical of conventional wells). 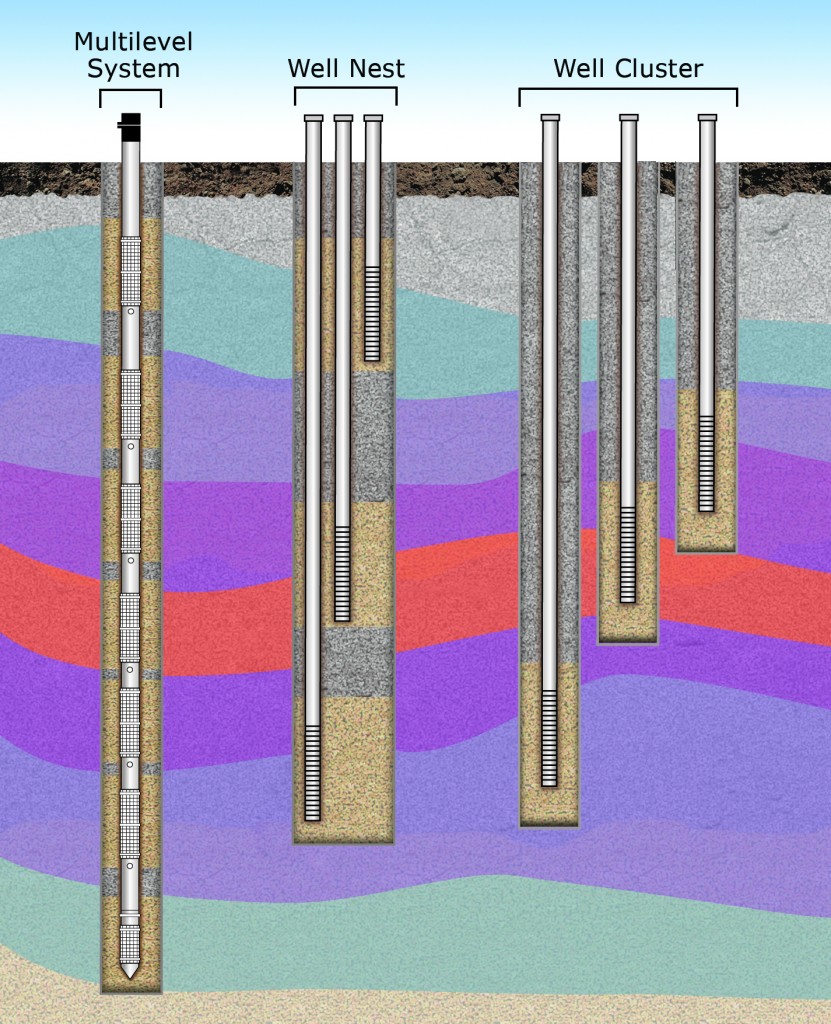 There are numerous other application advantages to using MLS technology:

In addition, when considering how to perform high-resolution site characterization, the CLU-IN site provides these criteria when deciding on the tools/techniques to use; MLS meet all of the criteria:

The CLU-IN site focuses on direct push tools for collecting samples across transects. Direct push tools are great tools for initial investigations, but most direct push tools cannot be used for long-term monitoring. On the other hand, once a MLS is installed, it can remain installed for data collection during the initial site investigation, further site characterization and development of a site’s Conceptual Site Model (CSM), and later to track remediation efforts. 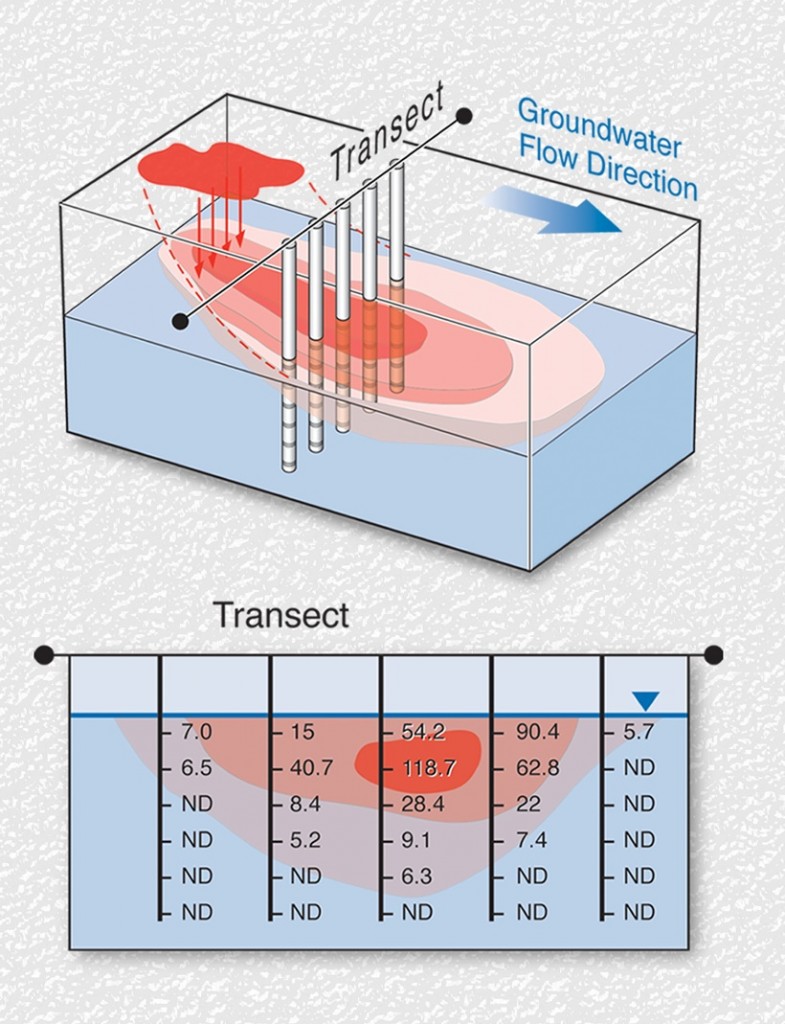 So why with all these advantages, are Multilevel Systems being overlooked?

We asked this question at a Round Table discussion held at our 2013 Solinst Symposium. The theme of the Symposium was “High Resolution, Depth-Discrete Groundwater Monitoring – Benefits and Importance”.

It was discussed that a major obstacle is the lack of guidance and educational opportunities available to environmental professionals and practitioners, specifically on the installation and use of Multilevel Systems. There is a large disconnect between research findings and putting the successful techniques and technologies to use in the field. In addition, perhaps “hydrogeologists-in-training” are not being taught enough about the benefits of MLS (or MLS technology in general).

Multilevel systems may also be overlooked, simply because practitioners are using the traditional methods that they have come to know and rely on. Though there are many documented drawbacks to using cluster and nested wells (unreliable seals), these options are still being widely used.

A comment was made that more responsibility needs to be put on regulators, especially in Canada, to take an active role in determining where best practice and guidance documents are needed, and making them available to practitioners.

Education, means of educating, and getting the technology “out there” are issues that need to be addressed – but a major hurdle in overcoming these issues is the perceived costs to install a MLS, therefore getting a MLS installed. MLS technology is likely more expensive to purchase, but not necessarily more expensive to install and monitor. There are advantages to using MLS technology that need to be weighed-in when doing a cost/benefit analysis.

As fieldwork is becoming more expensive all the time, it is increasingly important to ensure these up-front and long-term cost benefits of MLS technology are known. These benefits could be made clearer through published case studies – a case study example from a regulator or government agency would be extremely helpful! Unfortunately, many of the sites that use MLS technology tend to be high profile sites that do not want to disclose too much information to the public.

In all, Multilevel Systems should really be considered for any contaminated site investigation as a High-Resolution Site Characterization tool for groundwater monitoring. Overall, data from MLS technology, helps produce more accurate conceptual site models, and the ongoing data obtained from these systems allows the models to be refined, under variable conditions, over time. This gives answers that are more accurate on how to proceed with site cleanups, and can monitor efforts during the remediation process.