A study was undertaken to determine the success for aerobic bioremediation of aromatic hydrocarbons (BTEX) and MTBE (methyl tert-butyl ether) in high temperature, saline groundwater conditions. The study included laboratory microcosm experiments, as well as a field trial in Saudi Arabia, in which Solinst Waterloo Emitters were used.

To view the full paper published about this study, please visit the Wiley Online Library.

The laboratory experiments compared sediment and groundwater samples from two different aquifers, which were spiked with hydrocarbons and incubated for 106 days. One sample was from an aquifer in Canada (low temperature, low salinity), the other from a saline coastal aquifer located in a hydrocarbon distribution facility in Saudi Arabia (groundwater temperatures >30ºC). Oxygen was periodically added to each microcosm to sustain aerobic conditions, and temperatures were maintained to simulate field conditions.

Following the laboratory tests, a seven-month field trial was undertaken at the Saudi Arabian field site. The field study aimed to test the effectiveness of enhanced in situ aerobic bioremediation in the high temperature, high salinity aquifer.

The aquifer contains a plume of BTEX (benzene, toluene, ethylbenzene, xylenes), MTBE and other aromatic hydrocarbons. It is unconfined, consisting of sand and some silt, with the water table at approximately 6.5 m. The temperature of the aquifer varied from 30 – 37.4ºC during the study period, with an electrical conductivity of 6.1 mS/cm. 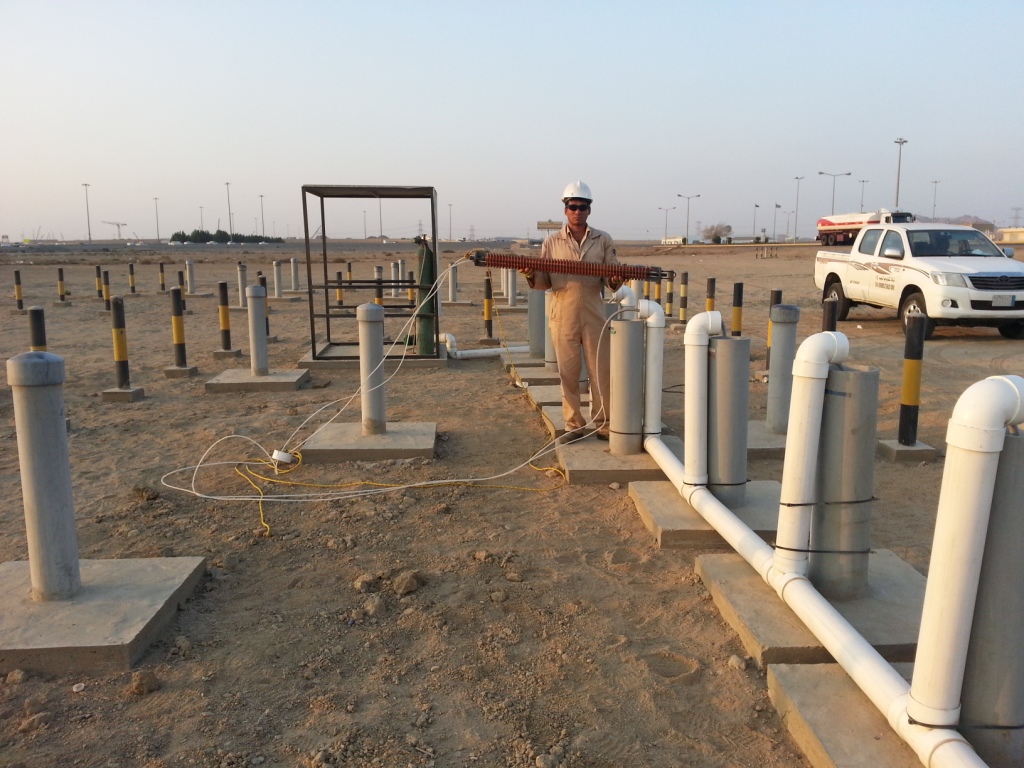 Waterloo Emitters were Recommended Due to the Remote Conditions

Ten Waterloo Emitters were installed on 1 m centers in a series, perpendicular to groundwater flow, creating a reactive zone. The 3.8″ diameter Emitters with LDPE (low density polyethylene) diffusive tubing, were installed in 4″ diameter monitoring wells with 3 m long screens over the water table. Oxygen cylinders were used to supply the Emitters. 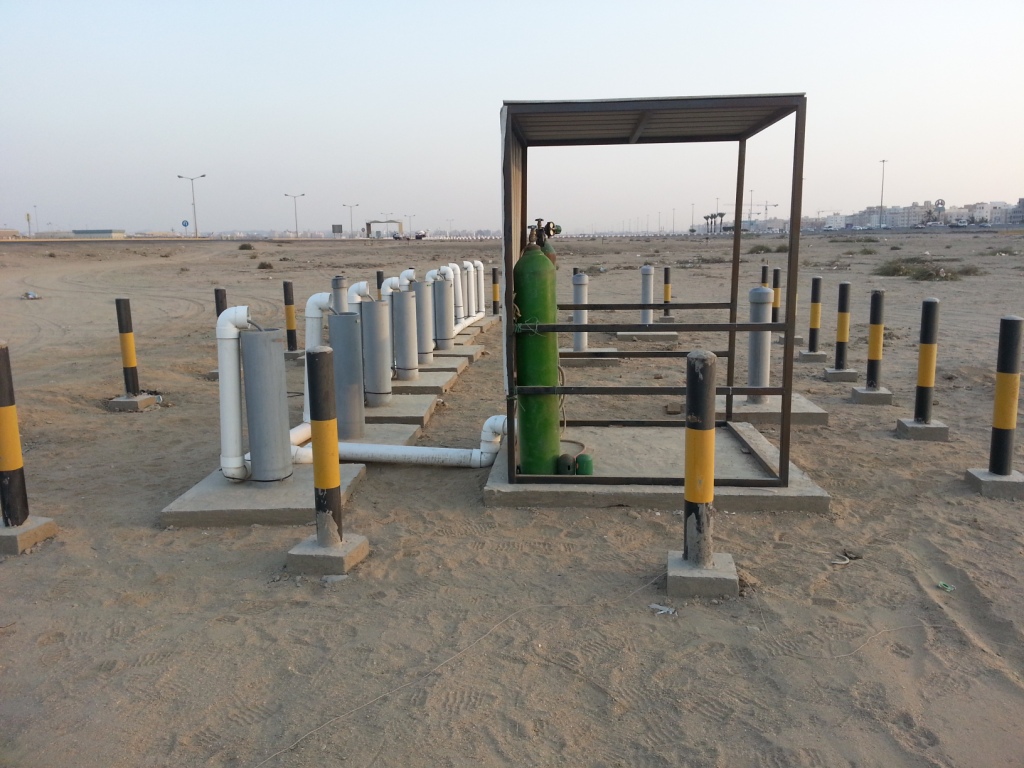 Groundwater samples were taken from monitoring wells upgradient and downgradient of the Waterloo Emitter reactive zone. Two sampling rounds were performed to obtain baseline values, and six subsequent sampling rounds were performed during the study period. The monitoring wells were sampled for chemical parameters, as well as to estimate bacteria populations.

The sampling results showed that there was a significant reduction in the concentrations of BTEX, MTBE, and other aromatic hydrocarbons, as the impacted groundwater flowed through the reactive Emitter zone (see Figure 1). The mass removal value of the BTEX compounds was greater than 80%, while the value for MTBE was 40%. 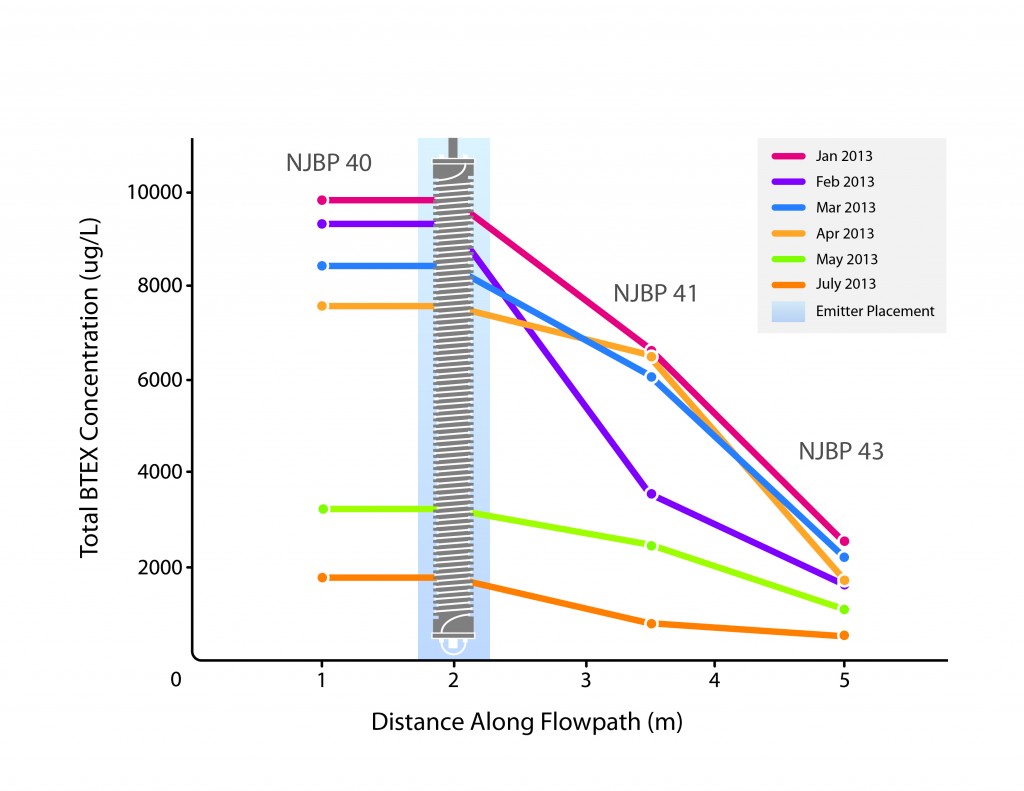 Figure 1: Concentrations of BTEX in Groundwater Along Flowpath and Through Emitter Reactive Zone. Flow is Left to Right.

The results also displayed that with the addition of oxygen to the subsurface, bacterial populations went from a diverse mix of anaerobic and aerobic microorganisms, to a population that was more dominant in aerobic bacteria. The aerobic bacteria appeared to be well adapted to the >30ºC temperatures and high salinity.

Overall, the results of the laboratory microcosm experiments and the field trial prove that natural attenuation of aromatic hydrocarbons is possible in high temperature, high salinity environments, under aerobic conditions.

As such, it was proven that enhanced aerobic bioremediation may be a viable option for the high temperature and high salinity conditions found in Saudi Arabia, for treating groundwater impacted with aromatic hydrocarbons and MTBE. The Waterloo Emitter provided a low cost, low maintenance option that successfully stimulated aerobic bioremediation in these very specific conditions.

Solinst thanks Rick McGregor, of InSitu Remediation Services Ltd., for providing the details of this study.