Researchers from the Biology Department at Villanova University in Pennsylvania, USA, and the Zoology Department at Oregon State are studying the growth and survival effects of intertidal elevation and wave shock on purple sea urchins (Strongylocentrotus purpuratus).

The study is being carried out at seven locations on the west coast of North America: Mabens Beach, British Columbia, Canada; Bodega Marine Reserve, California; Punta Baja, Baja California; and four other locations off the coasts of California and Oregon.

Dr. Michael Russell, professor at Villanova University, says that the overall aim of the study is to determine if large-scale / long-term fluctuations in ocean conditions can be detected as demographic changes in an intertidal organism. The study integrates historical records of life history characteristics with on-going monitoring of physical and biological processes.

At each study location, a subset of tidepools was chosen with differing tidal and wave exposures. Some of the pools contain tagged sea urchins that were studied in the 1980’s.

Solinst Levelogger Gold data loggers were selected for this project. Each tidepool was instrumented with a Levelogger Gold to record accurate temperature and pressure readings, in order to document intertidal elevations and pressures from wave action. 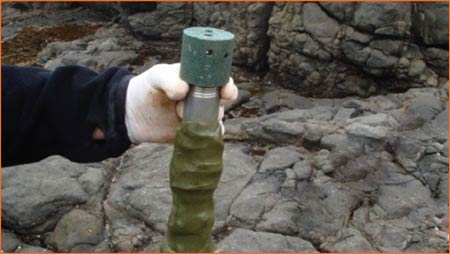 Fieldwork began in March of last year. Leveloggers were installed by drilling holes in the rock of the tidepools. Stainless steel pipes were used to house each of the Leveloggers in the holes. The pipes were cemented in place using waterproof epoxy and holes drilled in the caps to let sufficient water enter the housings.

Leveloggers are set to record temperature and pressure readings over the course of one year. Storm duration data and maximum pressure change from wave energy will then be used to correlate with sea urchin growth. So far, researchers are pleased with the use of Leveloggers in the study, and are looking forward to interpreting the data this spring.

Acknowledgements: Solinst would like to thank Dr. Michael Russell of Villanova University for providingdetails of this study and consent to publish this article.