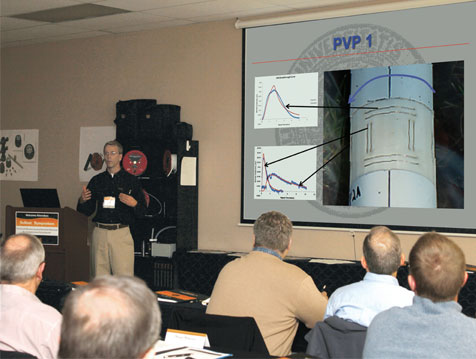 Rick Devlin kicked-off the Symposium with a presentation that stressed the importance of groundwater velocity measurements, especially for contaminant hydrogeology. Through case study examples, Rick showed that measuring velocity is essential in determining the fate and transport of contaminants, which in turn, helps focus remediation efforts in the right direction.

Traditional velocity estimates are based on gradients, hydraulic conductivity and Darcy’s Law. However, these techniques fail to detect the small-scale variances in the subsurface, and average flow over a large area. To overcome this, a method of direct velocity measurement is needed.

To fill this need, Rick led the development of the Point Velocity Probe (PVP). The PVP is a device based on the movement of a saline tracer around a PVC casing. With the PVP placed in the ground, flow travels around the probe body, picking up the tracer at an injection port, and moving it to detectors on the casing. The time it takes the tracer to flow from the injection port to the detectors is data logged at surface. Velocity can be calculated using this data.

Rick’s presentation took the audience through the testing and evolution of the PVP. It started as a simply constructed tool, to one that can be used for multilevel applications. He discussed unique “sandbox” tests that showed positive results in the lab, and looked at field testing undertaken at the Canadian Forces Base, Borden, Ontario, Canada.

Using these field tests, Rick compared the results of the PVP against other velocity estimation methods. His experiments showed that the PVP is a feasible tool for measuring high-resolution velocity data in non-cohesive material in the subsurface.

J.F. Devlin received an Honours Chemistry B.Sc. and a M.Sc. in Geology from Queen’s University, Kingston, Ontario, Canada.  He received a Ph.D. in Earth Sciences from the University of Waterloo, Waterloo, Ontario, Canada.  He has 4 years full time consulting experience with Water and Earth Science Associates Ltd., 5 years experience as a research assistant professor in the Earth Science Department at the University of Waterloo, and 10 years experience as a faculty member in the Geology Department at the University of Kansas, where he holds the position of professor.  His research interests include controls on granular iron reactivity in the subsurface, the development  and testing of delivery systems for biostimulation, and high definition aquifer characterization.   The former area of interest has led to the development of the PVP, a device for the measurement of groundwater velocities on the centimetre scale.