Jim noted that lateral flow and transport in the capillary fringe has been well documented, but what is not well studied, is the transport of organic compounds. This was the focus of work done by one of his graduate students. Jim presented the results of two release experiments done in the unsaturated zone at the CFB Borden aquifer. He showed how different fuel mixtures (containing gasoline, MTBE, ethanol, and hydrocarbons) are transported in the capillary fringe, and evaluated the effectiveness of three different sampling techniques. 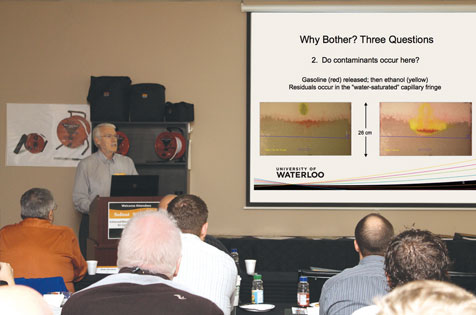 The sampling techniques that were reviewed were fully screened monitoring wells, soil coring, and multilevel wells instrumented with ceramic porous cups (suction lysimeters). It was evident that the fully screened monitoring wells were not able to sample water from the capillary fringe. The other monitoring approaches did yield useful data. The data obtained from the pore water of the suction lysimeters and the calculated concentrations from the soil cores, showed similar results.

The results showed that residual LNAPLs such as gasoline occurred in the “water saturated” capillary fringe, while the dissolved contaminants did move laterally. The lateral movement of both ethanol and the hydrocarbon compounds was found to be significant in the capillary fringe.

The movement of ethanol was entirely above the water table, while concentrations of benzene were found above and below the water table down gradient from the spill zone. Ethanol increases the solubility of volatile organic compounds (VOC), including benzene. This study has great significance as more ethanol-based gasoline is being used, thus potentially reaching the subsurface.

ABOUT THE SPEAKER – Jim Barker, Ph.D.
University of Waterloo

Jim Barker recently retired as a Professor at the University of Waterloo where he had been a faculty member in the Earth and Environmental Sciences Department since 1979. He remains involved in research and graduate teaching as an Adjunct Professor. Jim’s research has concentrated on the migration, fate, and remediation of organic contaminants in groundwater. Petroleum hydrocarbons (including MTBE and ethanol additives), coal tar creosote organics, and other industrial chemicals have been emphasized. His research uses field studies at contaminated sites and at the research aquifer site at Canadian Forces Base Borden. Current research is critically evaluating monitored natural attenuation and novel in situ remedial technologies, emphasizing enhanced biodegradation and chemical oxidation, for groundwater remediation.