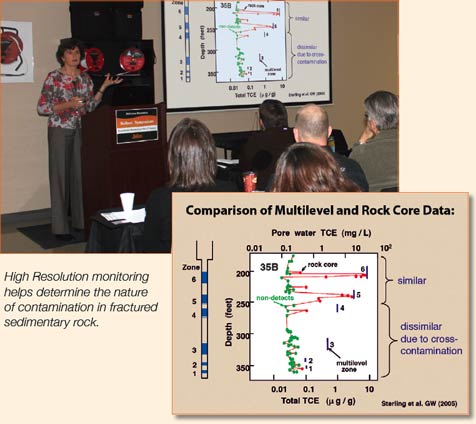 Beth Parker provided attendees with a glimpse of the extensive research she has been spearheading for the past 20 years. Her work is focused on developing the “Discrete Fracture Network (DFN) Field Approach for Investigating Contaminated Sites in Fractured Sedimentary Rock”. Understanding how groundwater flows and chemicals migrate in these networks requires a unique approach to research. She stresses that field testing in natural flow conditions is essential in determining the nature of chemicals in fate and transport in fractured rock systems. Her research shows that the density of the fracture networks plays a large role in how contaminants move. Using chlorinated solvent plumes as tracers and numerical modeling using discrete fracture network models, she has found that sparse fracture networks lead to more rapid transport of contaminants and distant plumes from the source zone, while in more dense networks, plumes expand more slowly due to attenuation effects from diffusion into and sorption within the rock matrix, which in some cases is enhanced by contaminant degradation.

Beth uses two critical information sources for her research, rock cores and the drilled holes. Rock cores are utilized for determining the physical and chemical properties of the rock matrix and for rock core VOC subsampling to determine the contaminant distribution. The drilled holes are used to perform hydrogeological testing and high resolution monitoring using various different techniques.

As cross-contamination between fractures is an issue in open boreholes, Beth uses lined boreholes to limit cross-connection and multilevel monitoring systems to obtain high resolution, discrete zone data. Beth and her colleagues use the high resolution data to create models for predicting and testing the movement of contaminants in fractured sedimentary rock. This research is important, as many of the areas of sedimentary rock in North America are home to large population bases with many potential sources of contamination, and in many cases the sedimentary rock comprises important water supply aquifers.

Dr. Beth Parker is a Professor in the School of Engineering and Scientific Director of the new Institute for Groundwater Research Innovation Partnerships at the University of Guelph and has more than 25 years of experience as a groundwater professional working at industrial sites managing subsurface contamination issues.  Dr. Parker has a Bachelors degree in environmental science and economics from Allegheny College, a Masters degree in environmental engineering from Duke University and a Ph.D. in hydrogeology from the University of Waterloo.  Prior to obtaining her Ph.D., she worked for more than 5 years for a Fortune 100 corporation in New York State managing DNAPL site investigation and remediation activities primarily at a large manufacturing facility where chlorinated solvents occur in fractured bedrock. Between 1996 and 2007, she was a research faculty member in Earth Sciences at the University of Waterloo. In 2007, she became NSERC Industrial Research Chair holder in Groundwater Contamination in Fractured Media.  Her current research and consulting activities emphasize field and laboratory studies of DNAPLs in sedimentary rocks, clayey deposits and heterogeneous sandy aquifers with focus on the effects of diffusion in to and out of low permeability zones on DNAPL fate, plume attenuation and controls on remediation.  She is currently involved in research and technology demonstration projects at Superfund and RCRA facilities in the United States and similar sites in Canada, Europe and Brazil, where innovative approaches to site characterization using a suite of high resolution methods, including core sample analyses and multilevel systems, and remedial technologies, including in situ oxidation of chlorinated solvents, are being evaluated. In December 2009, Dr. Parker was the recipient of the John Hem Award for Excellence in Science and Engineering from the Association of Ground Water Scientists and Engineers of the United States National Groundwater Association.