Two “citizen scientists” in Tennessee have taken on the task of studying more closely, the vast network of karst springs in the state. Past research has done a good job in mapping and identifying these features, but there remains a knowledge gap when looking at which karst springs are the largest in terms of discharge, and the relationships between recharge and resurgence areas.

Brian Ham and Ben Miller started the Karst Springs Initiative in early 2016. Their aim is to add to current information, and increase the understanding of karst hydrogeologic systems in Tennessee using measured data.

Karst topography is a unique landscape made up of soluble rocks, such as limestone and dolomite. Because of their geology, karst systems are characterized by underground drainage systems, including caves formed by the dissolution of the soluble rocks. Karst springs are important monitoring points for water quality since they can represent the overall health of the entire recharge area/groundwater basin.

To begin the project, individual flow measurements were conducted at several springs to begin establishing a database of spring flows, which is now regularly updated with new measurements and data.

The flow data is being compared and used to determine the largest springs, and therefore, which ones to monitor more closely and continuously. The measurements will also help to interpret the flow characteristics in these karst environments. 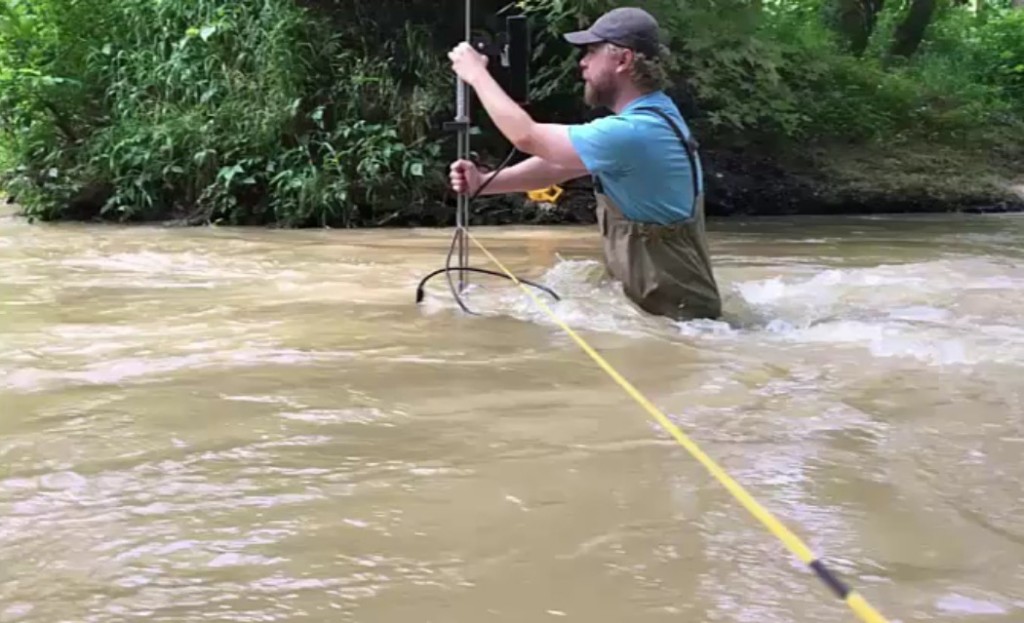 In March 2016, their first permanent gauging station was installed in the East Fork Obey River Rise—thought to be one of the biggest springs in Tennessee. A stilling well was installed to house a Solinst LTC Levelogger Junior water level datalogger. A Barologger Edge is installed nearby in a protective PVC enclosure; its data is used to barometrically compensate Levelogger water level data. The dataloggers are set to record at 15-minute intervals. Depending on conditions, data is downloaded every 3 months.

Here’s a video that shows Brian and Ben installing the stilling well and conducting flow measurements:

The water level data provided by the datalogger, together with flow measurements, are used to determine discharge at the spring. Individual discharge measurements will be used to create a rating curve and establish a relationship between water level and discharge. This will allow the range of discharges for that spring to be monitored and recorded over time using the continuous water level data from the Levelogger.

Since LTC Leveloggers also record temperature and conductivity, this extra data will be interpreted, along with the level data, to help determine groundwater basin recharge characteristics.

Initial data collection proved to be rewarding. Brian and Ben were able to set up a crowdfunding site to help expand their initiative. They shared preliminary results at the Geologic Society of America Annual Meeting in September 2016, as wells as with smaller groups such as the Nature Conservancy in Tennessee, Tennessee Department of Environment and Conservation Division of Water Resources, and local caving groups, who have all seen value in the data and shown support for the project. 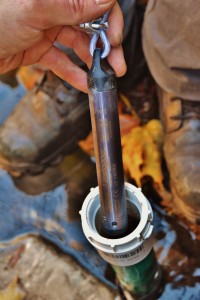 Recently, Solinst donated two Levelogger Edge dataloggers to help with the project. One of the Leveloggers has been installed in a gauging site at the upstream sink of the East Fork Obey River. The other Levelogger was installed at Big Swamp Spring near Spencer, Tennessee. 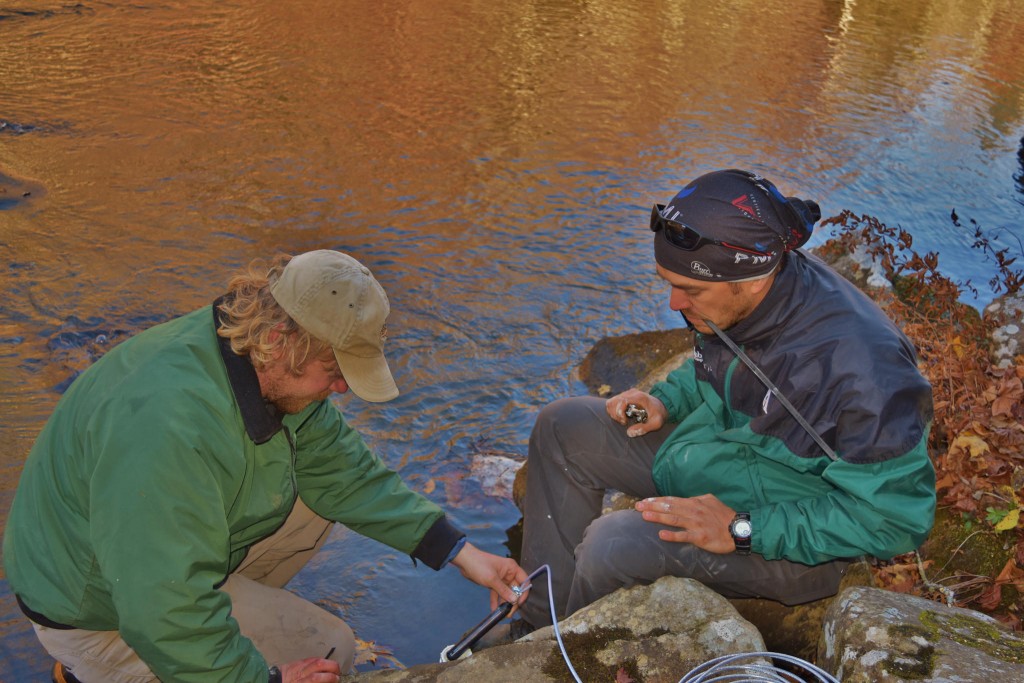 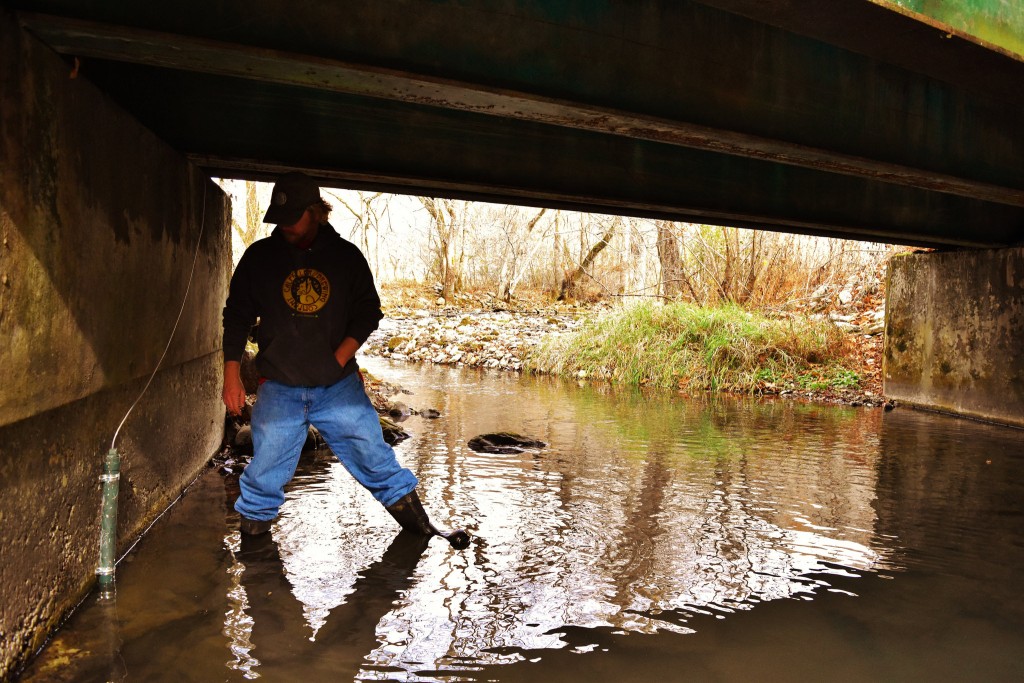 Installing a Stilling Well at Head of Sequatchie Spring

This video shows Brian and Ben installing the gauging station at Head of Sequatchie Spring and conducting flow measurements at various locations:

A staging site was also installed at Big Spring in the Caney Fork River drainage using a Levelogger Junior Edge. The data collected will be an important part of understanding the hydrology in this portion of the Cumberland Plateau in Tennessee.

Thanks to generous donations, Brian and Ben have added to the number of continuous monitoring sites in their network.

Along with the continuous staging sites, Brian and Ben are out in the field taking individual discharge measurements about once a month at each spring. The aim is to capture various flow events, including low and high flow, to better establish their rating curves.

In this video, Brian and Ben collect more flow samples at a number of springs:

Recently, a dye trace was conducted in the East Fork Obey River Valley, to help define the groundwater recharge basin for that area.

Brian and Ben’s first major goal is to collect and analyze one full year of data from each spring. The data will be used to compare the springs to each other. All of the data combined will help expand knowledge of karst hydrogeology in the state, and provide data for continued research.

Eventually, the hope is to publish the findings and share the database of measurements to help others understand and protect these resources in the future.

Solinst thanks Brian Ham and Ben Miller for providing the details of their work. For more information on their initiative, visit: https://experiment.com/projects/karst-springs-initiative-documenting-tennessee-s-largest-springs