Vapor intrusion refers to the movement of volatile chemicals from the subsurface into the indoor air of overlying buildings. The most common source is groundwater or soil contaminated with volatile organic compounds (VOCs). VOCs emit vapors that migrate into pore spaces of the soil and upward into the overlying environment.

Generally, vapors enter buildings through cracks and openings in the foundations because of a difference between interior and exterior pressures. Pressure differences occur due to many factors, including barometric fluctuations, wind load, thermal currents, and depressurization from exhaust fans and ventilation or heating systems in buildings.

Chemicals such as BTEX and TCE breakdown and produce vapors, that if accumulate to high levels, can pose shortterm safety concerns such as explosions; chemicals such as benzene and vinyl chloride are toxic when inhaled. More often, vapor concentrations are present at low levels; this can cause chronic health effects if exposure to them is long-term.

Solinst CMT Multilevel Systems provide a quick and cost effective way to delineate soil gas concentrations below buildings. To allow discrete profiling, the system is easily modified to accommodate vapor monitoring in one or more channels. It is constructed in the same manner as for groundwater sampling, except that each vapor-sampling channel is fitted with a special seal assembly, which is inserted at the wellhead.

A channel seal assembly allows attachment of a three-way valve to direct vapor to a pressure gauge connected at one end of the valve and a sample vessel at the other. A vacuum pump can be used to draw samples from each discrete zone. 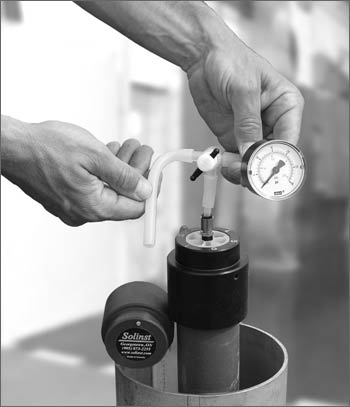 Near-slab sampling is primarily performed to identify underground contamination and the potential source, extent and movement of the pollutants. Sub-slab vapor samples are used together with indoor air and outdoor air samples to determine any current human exposure, potential for future exposure and site specific attenuation factors.

The multiple channels in the CMT allow sampling at discrete depths, and allow groundwater data to be collected simultaneously, if required for comparison. The result is defensible data, which allows more detailed site characterizations and more accurate risk assessments, enabling increased confidence in decision-making.

Vapors have the potential to diffuse through some materials, including polyethylene from which the CMT is constructed. In order to limit the adverse effects of diffusion it is recommended that a protocol be developed that ensures a sample is obtained directly from the CMT port intake.

Purging any gas present in the CMT is crucial, followed by field screening of vapor concentrations until readings stabilize; it is recommended that sampling follow immediately after. Maintaining a steady flow of vapor through the system while sampling is advisable.

Solinst offers other instruments ideal for vapor sampling. Model 615 Drive-Point Piezometers can be used as temporary wells to sample soil gas. A compression fitting allows the attachment of 1/4'' sample tubing directly to the top of the screened portion of the drive-point. Model 410 Peristaltic Pumps allow vapor sampling from shallow depths. 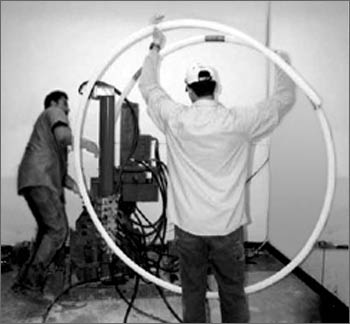 7-Channel CMT installation for monitoring groundwater and soil gas beneath a building.